Banerjee said many saffron leaders were distributing cash under the protection of the Central forces to people to get votes. 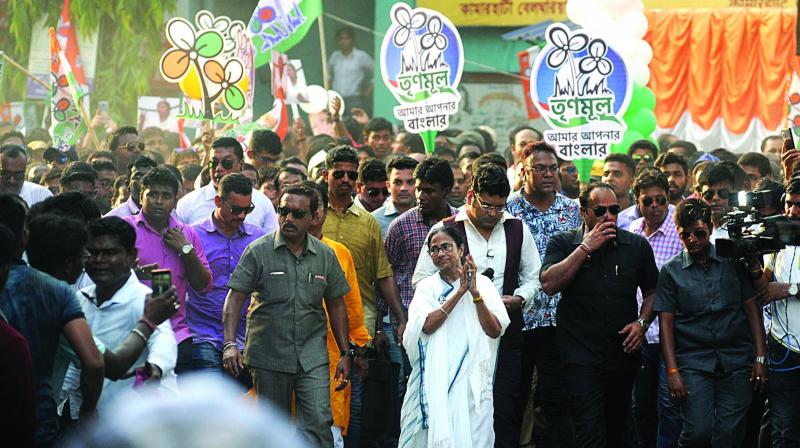 Kolkata: West Bengal chief minister Mamata Banerjee on Friday alleged that BJP is using the hawala route to transfer money for distribution among the voters and law enforcing agencies are not taking any action in this regard.

Training guns at BJP candidate Bharati Ghosh, Ms Banerjee said many saffron leaders were distributing cash under the protection of the Central forces to people to get votes.

Addressing a party rally at Ashokenagar in North 24 Parganasshe said, “You have seen that a BJP candidate was caught with a few crores of cash on Thursday. Even today I have heard hordes of cash are being transported in boxes in cars of those who enjoy Z-plus security cover provided by the Central Reserve Police Force and Central Industrial Security Force.”

Ms Banerjee alleged, “The boxes of cash are being given to the miscreants who are asked to rig the votes. They are told to hold feasts with drinks for the poor people for few days. Is it an election? Those whom I am referring to can understand this certainly. When we get down from the helicopter, any poll official can click photo. There is no restriction. But why the press is not allowed to those places where Narendra Modi alights?”

Ms Banerjee said that a BJP candidate was even caught carrying crores — a reference to the police seizing Rs 1.13 lakh from the vehicle of the saffron party’s candidate and former IPS offficer Bharati Ghosh late on Thursday night at Pingla area in Bengal’s West Midnapore district.

State BJP president Dilip Ghosh refuted Ms Banerjee’s allegations and maintained that the law would take its own course.

When contacted, Mr Ghosh said, “The police will file a case if she was caught. Everything will happen according to the law. Everyone has to face and follow the law.”

If she had the money beyond permissible limit, the police will take action. And she will have to respond legally if the police acts legally.”