Apparently nursing her PM ambitions, Banerjee had been giving clear indications that she was reluctant to work under the leadership of Gandhi. 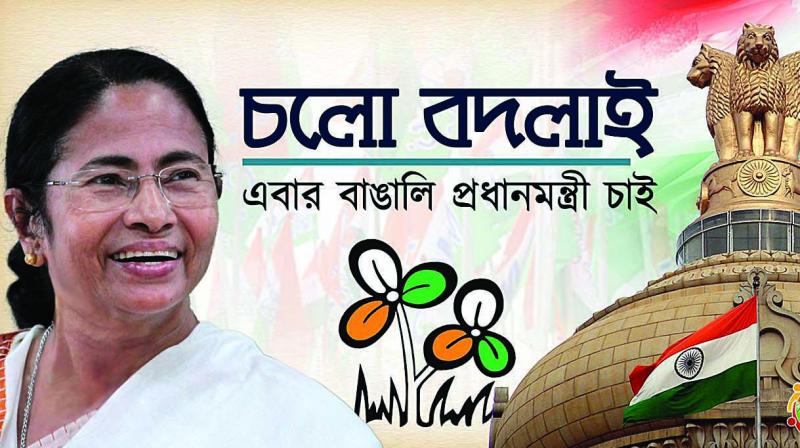 Supporters of Trinamul Congress chief Mamata Banerjee launched a soft campaign on Facebook to project her as a prime ministerial candidate. The slogan reads: “Come, let’s make a change... Let’s get a Bengali Prime Minister this time.”

New Delhi: The Congress’ hope of projecting party president Rahul Gandhi as the Opposition’s prime ministerial “face” hit the first hurdle with supporters of Trinamul Congress supremo Mamata Banerjee launching a soft campaign on Facebook to project her as the Opposition candidate for Prime Minister in the 2019 general election.

A Facebook page set up by Mamata fans — “All India Trinamul Congress — AITC Supporters” put up posts stating: “Chalo Bodlai-Ebar Bangali Prodhanmantri Chai” (Come let’s bring a change — This time we need a Bengali Prime Minister). A photograph of a smiling Ms Banerjee was put above the slogan. Some of the comments read: “TMC Zindabad — Didi Pradhan Mantri hobe” (TMC Zindabad — Didi will be the next Prime Minister).

This social media page is, incidentally, run by her fans (Trinamul supporters) and is not the official Trinamul Congress page, a party leader clarified.

It may be recalled that even before Mr Gandhi threw his hat into the ring, TMC leaders have been sending out signals that it would “prefer” Ms Banerjee as leader of the Opposition charge in the next general election.

Apparently nursing her PM ambitions, Ms Banerjee had been giving clear indications that she was reluctant to work under the leadership of Mr Gandhi. During her recent visit to New Delhi, Ms Banerjee had not met Mr Gandhi but had called on his mother, Mrs Sonia Gandhi. Also, the TMC has been against the Congress move for the impeachment of Chief Justice of India Dipak Misra. “The Congress was wrong to move the impeachment notice against CJI Dipak Misra. The Congress wanted us to support it. But we did not,” Ms Banerjee had gone on record as saying during her Delhi visit.

Making it clear that she was not willing to come under the Congress’ umbrella, Ms Banerjee had pitched for a 1:1 formula, which in electoral terms would mean one winnable candidate versus another in each parliamentary constituency across the country. The United Front or the Grand Alliance (if formed) would put up one common candidate, which the rest would support. If this particular formula is followed, the Congress’ role in electoral politics will be completely marginalised in the southern states as well as in states where anti-BJP regional parties were in a commanding role.

Pitching for a federal front, Ms Banerjee has also been in touch with other Opposition chief ministers, including K. Chandrashekhar Rao, N. Chandrababu Naidu, Arvind Kejriwal and Naveen Patanaik. Eyebrows were raised when NDA ally Shiv Sena marched under the Trinamul Congress’ leadership to Rashtrapati Bhavan in protest against demonetisation. The TMC also got a major boost when DMK leader M.K. Stalin tweeted that the DMK has always stood for the unity of regional parties and stronger federal cooperation. “I endorse the efforts of @MamataOfficial to bring together various political parties to oppose the autocratic and anti-democratic rule of the BJP,” he had said.