India   All India  11 May 2017  Pak Army’s journey into unsoldierly debasement
India, All India

Modern day armed forces of both India and Pakistan owe their genealogical construct and DNA to the erstwhile British Indian Army. 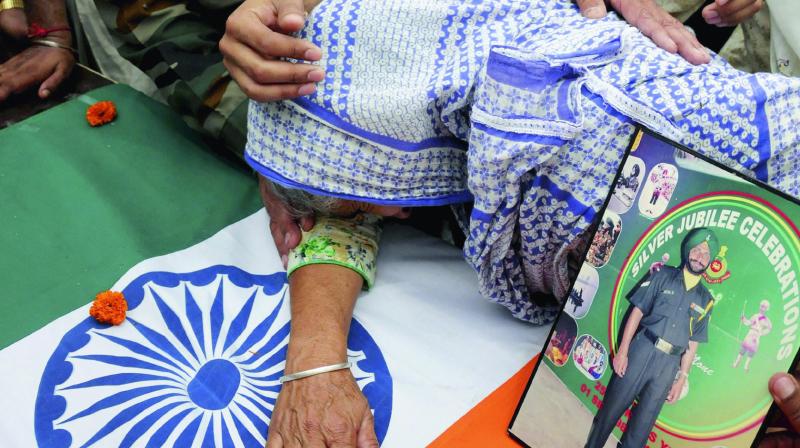 Late Naib Subedar Paramjit Singh’s mother mourns near her son’s body on its arrival at their village Vain Poin, some 40 km from Amritsar. (Photo: PTI)

Military history of the Indian subcontinent is over 7,000 years of civilisation that is replete with bloody foreign invasions and local wars amongst kingdoms. Theories of warfare, esoteric weaponry and chivalry in battlefield are part of folklore and ingrained in the psyche and imagination of its people. References to the art and science of soldiering during the Vedic periods, in epics like the Mahabharata and Ramayana, and the subsequent ravages and wounds of aggression from distant lands, have bequeathed a unique martial tradition that made an avowed imperialist like Winston Churchill to pay tribute to, “the unsurpassed bravery of Indian soldiers and officers” — nearly 150,000 soldiers from the Indian subcontinent died in the two World Wars. The raw courage of Jemadar Prakash Singh Chib (13th Frontier Force Rifles), Naik Fazal Din (10th Baluch Regiment), Rifleman Lachhiman Gurung (8th Gurkha Rifles) and the 37 others who were awarded the Victoria Cross, is a testimony to the fine soldering traditions and instincts in the Indian subcontinent, from which nations were subsequently carved.

Modern day armed forces of both India and Pakistan owe their genealogical construct and DNA to the erstwhile British Indian Army. The shared values, ethos and cultures of the two “partitioned” militaries, took diametrically different trajectories and narratives in their respective sovereign journeys, immediately after Partition. While India inherited a very vibrant, structured and all-pervasive democratic culture and leadership, Pakistan was a more “sudden” reality bed-rocked on the flawed “twin-nation” theory that hoped to unite the disparate diversities — hence opening the space for a more assertive role for the Pakistani military in day-to-day governance. The Indian Constitution on the contrary, further ratified and legitimised the supremacy of the civilian/democratic framework, vis-à-vis the defence forces.

Pakistani defence forces’ baptism with “palace intrigues” and political machinations started within days of Independence with “Operation Gulmarg” (involving two of the only four native lieutenant colonels of the Pakistani Army, then) — a devious plan to foment and instigate local uprising in Kashmir, by dispatching lashkars (tribal militias) and Pakistani regulars. Soon the patented cat and mouse game of the Pakistani establishment started with the rocky relationship of the first PM Liaquat Ali Khan and the Pakistani military, culminating in the first, of the many subsequent coup initiatives with the “Rawalpindi Case” conspiracy. This led a nervous Pakistani PM to over-rule seniority and competence in the very first appointment of a native Pakistani Chief of Army Staff, when Gen. Ayub Khan was selected, when his name was not even in the nomination list sent for consideration. Ostensibly pliant, and the “least ambitious”, Ayub would set the precedent for many more to follow, when he deposed his mentor, President Iskander Mirza, in a coup to rule till 1969, only to be replaced by Gen. Yahya Khan. However, seeds of Pakistani Army’s interest in the civilian, political, commercial and geopolitical domains were irreversibly planted and an extra-constitutional role for the military, institutionalised.

In India, the defence forces remained disciplined in their “step”, steel and professional march. 1965 and 1971 were brilliant exploits of the Indian forces and despite the euphoria for the Indian soldier — the leadership and systems within the organisation ensured the apolitical sobriety and the professional imperatives of honour, nobility and dignity in profession. In a “moral state” like India, the armed forces steadfastly restrained themselves to the constitutionally mandated role of the sword-arm of the nation. For sure, individual indiscretions, culpability and mistakes have occurred — however, institutionally, the armed forces have no independent “will” or design of their own, other than that of the sovereign. There is no mandate for any regional, religious or castiest bias to debar any individual from rising to the highest ranks of the three services. The Indian armed forces are perhaps the only breathing and thriving personification of the profound and composite concept of “India”.

Whereas, Pakistani military entertains many caveat angularities around minorities, regional and sectarian differences, within. The formal rule of the Pakistani military for 35 out of the 70 years of Independence and the informal “behind-the-scenes” string-pulling for the balance period has ensured a parallel power structure in the Rawalpindi GHQ, along with the civilian government in Islamabad. The Pakistani Army is infamously known as “Army Inc” for their commercial interests and generosities that they bestow on themselves — Gen. Raheel Sharif was allotted 90 acres of land on retirement, apparently, “in accordance with the existing rules and purely on merit”!

Unsurprisingly, public mainstreaming of the Pakistani military has infused the larger societal decay within its veins. Unlike the “barrackised” Indian forces, strains of uber-religiosity, ideological and political affiliations afflict the Pakistani set-up. Often reports of purges (mostly, at junior levels) are commonplace. Degradation in soldering ethos is an inevitable outcome of such exposure and domain overreach. While militaries have wars, casualties, spies and even prisoners, as part of the operational turf — there is the subscribed Geneva Convention that prohibits the torture and other cruel or inhuman treatment and outrages upon individual dignity. In recent years, the track record of the Pakistani military has been increasingly unbecoming of a professional soldier that assumes, affords and insists on a noble warrior’s creed and conduct. Kargil war saw the brutal and inhumane torture on Lt. Saurabh Kalia — the return of his mutilated body was in sharp contrast to the treatment that was meted out to the 90,000 Pakistani prisoners-of-war in 1971.

Recent mutilation and beheading of constable Prem Sagar and Naib Subedar Paramjit Singh follows the similar unsoldierly and unscrupulous acts that happened in Machil sector last year, in Rajouri sector in 2013 and in Kel sector in 2008. It is an unequivocal sign of the continuing moral debasement and ignoble soldering sensibilities that are either encouraged or condoned, reflective of the shameful degradation of the Pakistani military culture. As a nuclear power that has never won a war and remains vindictive, portents of increasing unprofessionalism of its defence forces bodes ill for the region, as indeed, for its self-combusting journey.

The writer is a retired lieutenant-general and a former lieutenant-governor of Andaman & Nicobar Islands and Puducherry.