The three men, on their way back from Tablighi Jamaat in Delhi, had organised a religious congregation of nearly 100 person on March 12 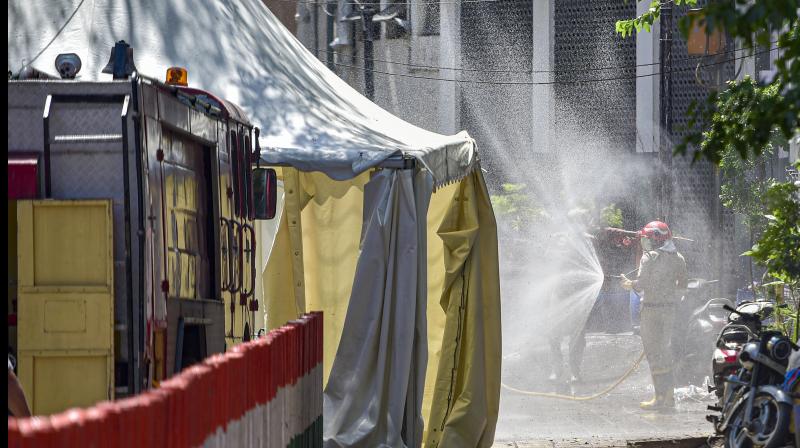 Guwahati: In what has created panic in Guwahati, the Assam health department on Friday declared Aathgaon Masjid and kabristan as containment zone where three corona positives, who on their way back from Tablighi Jamaat at Nizamuddin in Delhi, had organised a religious congregation of nearly 100 person on March 12.

Pointing out that Jamaluddin Hazi and Jamaluddin, who attended religious congregation in Delhi and tested positive for coronavirus infection, had revealed that they spent a night at Aathgaon Masjid with one Rehiuddin of Dhubri, who also tested positive, Assam health minister Himanta Biswa Sarma told reporters,

“Now three of them have confessed that they went to the masjid on March 12 to address a religious congregation of about 100 people.”

Informing that they have asked to register an FIR against Jamaluddin Hazi, who is the resident of Dhubri, for his misleading information, the minister said that Hazi, before surrendering to health authorities, visited three civil hospitals —- Bongaigaon, Dhubri and Goalpara — for medical help on his own. He has done a huge damage as doctors in these hospital were placed under quarantine for getting in touch with an infected person, said the minister, regretting that even after he was detected positive, he did not reveal that he attended a religious congregation too.

“He told us that three of them stayed on the night of March 12 at the masjid. We had no reason to doubt but a caretaker of the masjid on coming to know about his infection revealed that a religious congregation was held at the masjid. We have collected 58 names so far who were present,” said the minister, adding that it has become a highly challenging task for authorities to detect all the persons.

“We would like to request all those who attended the March 12 congregation to come forward for a checkup,” said the minister, who also announced that they have also placed the order for one lakh rapid test kits.

Mr Sarma said that they have also decided to go for rapid test that ICMR has allowed but entire exercise would depend on availability of the rapid test kits. “We have been assured supply by March 22 only so we have approached central government to make available the kits,” said the minister who also clarified that they would be following the guideline of the central government on lockdown