India   All India  11 Apr 2019  RJD chief writes letter to public ‘to save democracy’
India, All India

RJD chief writes letter to public ‘to save democracy’ 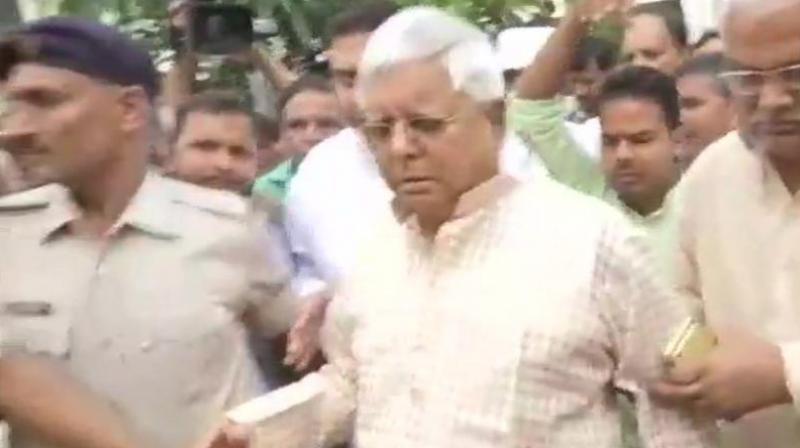 Patna: The Supreme Court on Wednesday rejected the bail petition of RJD chief Lalu Yadav in connection with the fodder scam cases.

After his bail petition was rejected Lalu Yadav released a two-page letter through twitter asking his supporters “to fight and save democracy”.  In his letter, he said “I will not let them conspire against people of Bihar again. I am in prison but today in I am sharing my thoughts with you. I feel that by sharing our thoughts we can jointly fight and win against those destructive people who are trying to divide the country”.

He said “Everything including your country, society, and Lalu who fought for your rights and dignity are at stake. You have to fight and save democracy”.

Mr. Yadav was seeking bail citing his old age and deteriorating health conditions. Lalu Yadav who has been sentenced to around 25 years in four fodder scam cases was shifted to Rajendra Medical Institute of Medical Sciences (RIMS) Ranchi in March 2018 for treatment.

According to RJD spokesperson Manoj Jha, “party respects court’s verdict but we also would like to say that Mr. Lalu Yadav needs critical medical care as he is suffering from multiple serious ailments”.

RJD leaders said that the Court’s verdict has come as a major blow not only to his family but to the RJD which was expecting his release ahead of 2019 general elections.

However, political observers have a different view on the issue. They said that Wednesday’s court verdict was not his first setback. “He may not contest elections but his supporters still consider Lalu Yadav as their Messiah”.

They said Lalu Yadav who has been sent to jail seven times earlier “has always bounced back and emerged even stronger”.

Political analysts recall that since 1977 this would the first election when Lalu Yadav couldn’t campaign for his party. In the last two elections – 2014 Lok Sabha and 2015 Bihar assembly elections he had actively campaigned for his party and the grand alliance.

RJD Chief Lalu Yadav has been convicted in four fodder scam cases estimated to have caused a loss of Rs. 950 Crores to the Exchequer when he was the Chief Minister of Bihar.

The fodder scam had surfaced in 1996 and a charge sheet against 38 persons was filed by the CBI on October 27, 1997. Lalu Yadav was made one of the main accused in the case.