The party sent a video clip of his media interaction along with the letter signed by Ahmed Patel, Jairam Ramesh and Randeep Surjewala. 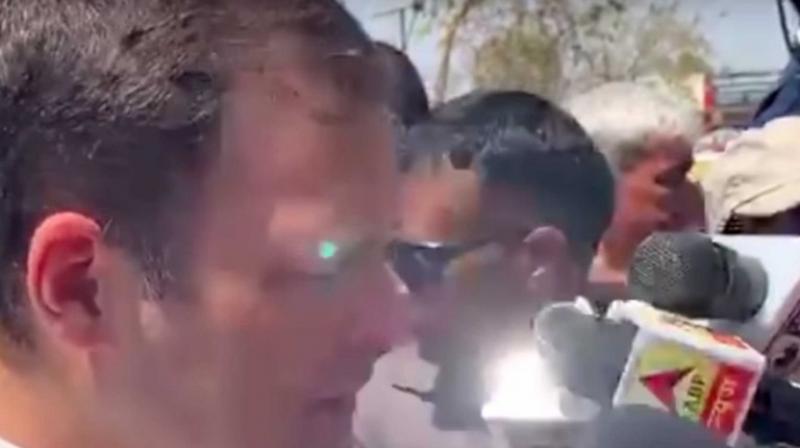 The letter stated a green laser was pointed 7 times at Rahul Gandhi’s head when he was interacting with the media. (Photo: Screengrab)

New Delhi: The Congress has alleged a security breach of party president Rahul Gandhi during his visit to Amethi in Uttar Pradesh. The party referred to the day when Gandhi went to the constituency to file his nomination.

According to Ministry of Home Affairs, they have not received any letter regarding the alleged breach in security of Congress president Rahul Gandhi.

Director of Special Protection Group, however, informed the “green light” shown in the video clip was found to be that of a mobile phone used by AICC photographer.

In a letter to Home Minister Rajnath Singh, the party have asked the government to “probe and neutralize the threat, if any”. They have also asked to ensure that the protocol relating the Congress president’s security detail is strictly followed.

Congress wrote to Home Minister over breach in security of its president Rahul Gandhi y'day; says Gandhi was addressing media after filing nomination from Amethi, "a persual of his interaction will reflect that a laser was pointed at his head, on at least 7 separate occasions" pic.twitter.com/f3Jmnjhzs5

The letter stated a green laser was pointed 7 times at Rahul Gandhi’s head when he was interacting with the media.

Congress said, “…a laser (green) was pointed at his head, intermittently on at least 7 separate occasions in a short period; including twice at his temple on the right side of the head”.

The party sent a video clip of his media interaction along with the letter signed by Ahmed Patel, Jairam Ramesh and Randeep Singh Surjewala.

Citing the assassination of Rahul’s father and grandmother, former Prime Ministers Rajiv Gandhi and Indira Gandhi, the party believed that the breach was “a cause of grave and pressing concern”.

The Congress told the Home Minister that Rahul Gandhi’s security was the “first responsibility” of the central government and the home ministry.