H D Revanna said UPA would come to power because numerologically the date of polling suits the UPA. 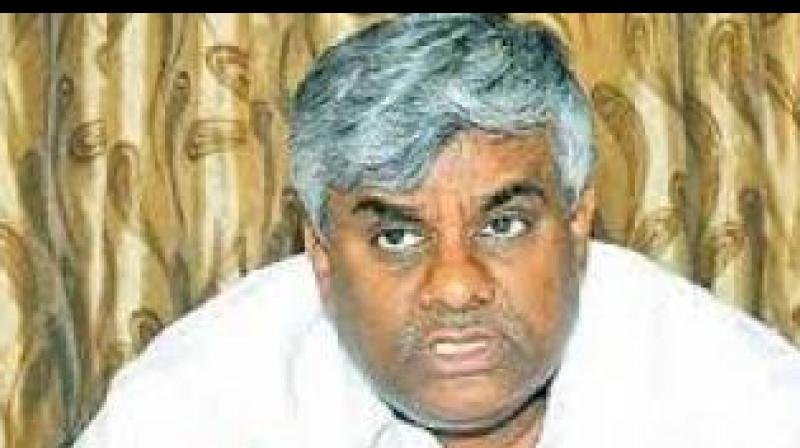 'Modi has cheated the state and the nation. What is Modi's contribution to the nation,' H D Revanna. (Photo: File)

The PWD minister said UPA would come to power because elections in Karnataka were taking place on April 18, which, he claimed, numerologically suits the UPA.

"Modi has cheated the state and the nation. What is Modi's contribution to the nation," he asked

"Note it down in the diary what I say today because I will come back to you again - If Modi comes back in the country I will quit politics," Revanna told reporters in Mysuru.

The minister, who often makes news for his superstitious beliefs and has a strong belief in astrology, gave out some figures.

When journalists sought to know the implications of elections in Karnataka on April 18, Revanna said, "You don't know about 18".

Last time the elections (in Karnataka) took place in 2018 - 18 means one plus eight, which is nine. Because of this combination Kumaraswamy (his younger brother) became chief minister.

Again this time there is a combination of 18, whose sum is nine. The UPA will come to power once again in the country."

Asked what was in the store with regard to another election date of April 23 for Karnataka, Revanna said that is a separate issue.

The minister was in the news recently for holding at least seven to eight lemons in the hand at Hassan at a public function to address Congress workers.

His son Prajwal Revanna is contesting from Hassan on JD(S) ticket, a seat vacated by the JD(S) supremo Deve Gowda for the entry of his grandson into politics. Gowda himself opted to contest election from Tumakuru at the ripe age of 87.

Deve Gowda's second grandson and chief minister Kumaraswamy's son Nikhil Kumaraswamy is also contesting the Lok Sabha election from Mandya. The Hassan event saw rebellion by Congress workers who said they will not support or work in favour of Prajwal.

Asked why he carried so many lemons in Hassan, Revanna jokingly said, "They are all thieves. They need to be terrorised. It is necessary to keep a few lemons." To the question whether lemons are so effective, Revanna said, "If it wasn't effective, why one would keep it?"

He even suggested that the BJP state president B S Yeddyurappa and former deputy chief minister in the BJP government in Karnataka R Ashok should also carry lemons to withstand any black magic.