‘Don’t forget 2004. Vajpayeeji was invincible, but we won’: Sonia to BJP

Rahul said, 'Modi has done nothing for people of India in last 5 yrs. His invincibility will be in view after results.' 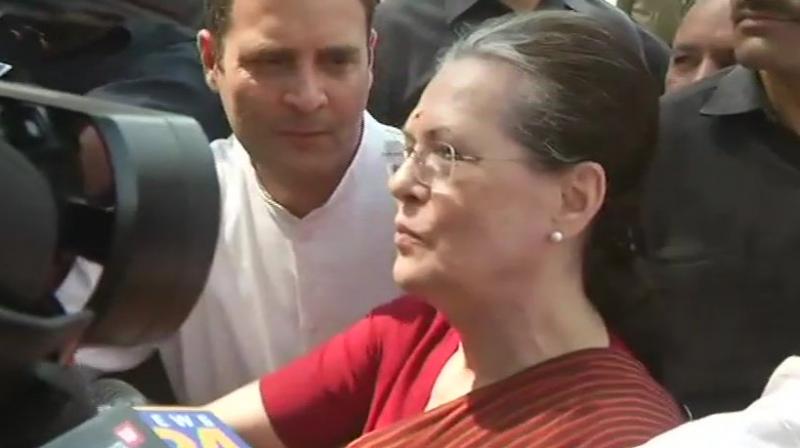 The UPA chairperson was referring to the 2004 general elections, when BJP-led ruling coalition had run the campaign with 'Shining India' slogan.(Photo: ANI | Twitter)

Rae Bareli: After a road show, UPA chairperson Sonia Gandhi on Thursday spoke to media and attacked Prime Minister Narendra Modi. Answering to a question if PM Modi is invincible, Sonia Gandhi said, “Not at all, not at all. Don’t forget 2004. Vajpayee ji was invincible, but we won.”

The UPA chairperson was referring to the 2004 general elections, when BJP-led ruling coalition had run the campaign with “Shining India” slogan. The Congress-led alliance defeated the Atal Bihari Vajpayee government in 2004 elections.

Elaborating her remark, Congress president Rahul Gandhi said, “There have been many people in the Indian history who had the arrogance to believe that they are invincible and bigger than the people of India. Narendra Modi has done nothing for the people of India in the last five years. His invincibility will be in view after the election results.”

Hitting out at Modi's allegations of corruption against him, Rahul on Thursday said that he is ready to face any action against him but Modi too has to give answers to certain questions first.

"I have done nothing wrong. He should say how did Anil Ambani, whom he considers his brother, get the contract of Rafale when he has never manufactured a single plane?  The Supreme Court has started investigations into the matter," he told reporters here.

"I am perfectly happy for Narendra Modi to take any action against me. He is in charge right now. But I would also like him to answer three or four questions. Why has Anil Ambani been given a contract worth Rs 30,000 crore? I am ready for an open debate with Modi on corruption wherever he wants," Rahul said.

Speaking further, he said: "The day Narendra Modi debates me on corruption, is the day he will not be able to look into the eyes of anybody in this country."

Before filing her nomination for the Lok Sabha polls, Sonia Gandhi following a 50-year-old tradition of the family offered puja at the residence of late Congress leader Gaya Prasad Shukla.

Voting for Rae Bareli parliamentary constituency will be held in the fifth-phase on May 6. Sonia Gandhi is set to face Dinesh Pratap Singh, who recently joined the BJP after leaving the Congress.