The officials said in Jammu on Tuesday that the Pakistani troops resorted to heavy mortar shelling at Battal in Khour sector, bordering Sunderbani. 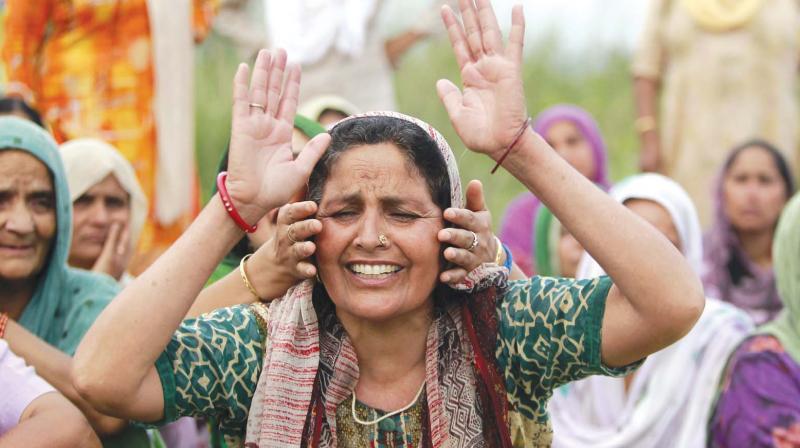 A woman mourns during the funeral of her son Indian army soldier Jaki Sharma, who was killed in firing from the Pakistan side of the border, in village Sanyal, Kathua district, 67 kilometers south of Jammu, India on Tuesday. Two Indian soldiers were killed in firing by Pakistani troops. (Photo: AP)

Srinagar: Two army jawans were killed in Pakistani army firing along the Line of Control (LoC) in Sunderbani area of Jammu and Kashmir’s Rajouri district on Monday evening.

The officials said in Jammu on Tuesday that the Pakistani troops resorted to heavy mortar shelling at Battal in Khour sector, bordering Sunderbani. Two army jawans were killed in the firing which started at around 6 pm and continued for about one hour. The Indian troops, the officials said, retaliated “effectively”. A defence spokesman said, “Our jawans gave a very effective response to the unprovoked Pakistani shelling, leading to heavy exchanges”.

Though the Indian Army officials believed the Pakistani troops suffered “heavy casualties” in the retaliatory shelling, Islamabad has, so far, not reported any such incident on their side of the de facto border.

The cross-LoC clash comes a day after J&K Chief Minister, Mehbooba Mufti, met  Prime Minister Narendra Modi, and Defence Minister Nirmala Sitharaman, in New Delhi to discuss with them security and political situation in the restive state and frequent firing incidents along the borders with Pakistan.

The army has identified the slain jawans as Riflemen Vinod Singh and Jaki Sharma. It said they were grievously injured in the shelling from across the LoC and succumbed to their injuries at a medical facility later. Mr Singh, aged 24 years, belonged to village Danapur, Jaurian in Akhnoor area of J&K’s Jammu district and is survived by his father, Ajit Singh. The army had said that Indian troops retaliated effectively.