IPL matches will be shifted to another venue amid the ongoing Cauvery protests. 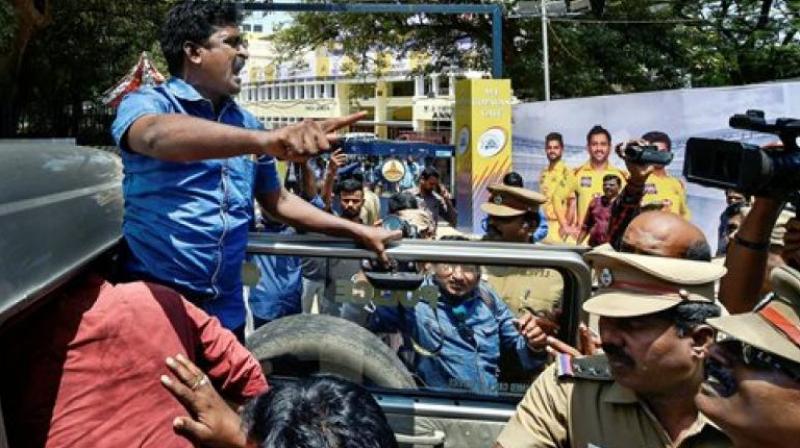 Recently, political parties and fringe groups have been demanding cancellation or postponement of all seven IPL matches in Chennai till the Centre constitutes the Cauvery Management Board. (Photo: File/ANI)

Chennai: The Board of Control for Cricket in India (BCCI) has reportedly decided to move the matches scheduled to be held in Chennai’s Chepauk Stadium to another venue following the Cauvery protests, news agency ANI reported on Wednesday, citing sources.

Recently, political parties and fringe groups have been demanding cancellation or postponement of all seven IPL matches in Chennai till the Centre constitutes the Cauvery Management Board (CMB). They have even asked spectators to boycott the matches.

Meanwhile, the ticket sales for the match between Chennai Super Kings (CSK) and Rajasthan Royals (RR) on April 20, which was scheduled to begin on Thursday, has been postponed. “Further details will be intimated in due course,” Tamil Nadu Cricket Association said.

Ahead of the match on Tuesday, the protesters congregated outside the stadium asking the spectators to boycott the match. They said empty galleries would send a strong message to the Centre which they say is defying the Supreme Court order by not forming the neutral body which would independently assess and share Cauvery waters between Karnataka and Tamil Nadu according to the water sharing deal.

Tamizhaga Vazhvurimai Katchi (TVK) workers carried out protests outside MA Chidambaram Stadium ahead of the match, carrying balloons stating, 'We do not want IPL, we want Cauvery Management Board". They were immediately removed by the police and Tamil Nadu Cricket Association who were on their toes.

Despite protests the match went on and the activists belonging to Naam Tamizhar, were detained.

Slippers fell near CSK fielder Ravindra Jadeja who was fielding at long-on. The incident occurred when the eighth over was in progress with the KKR batting.

Various political parties and outfits have demanded cancellation of IPL matches in Chennai, saying it was being held at a time when the state was witnessing widespread agitations on the vexed issue.

On February 16, the Supreme Court raised the 270 tmcft share of Cauvery water for Karnataka by 14.75 tmcft and compensated Tamil Nadu by allowing extraction of 10 tmcft groundwater from the river basin.

The court had granted six weeks to the Centre to formulate a scheme to ensure compliance of its 465-page judgement on the decades-old Cauvery dispute, modifying the Cauvery Water Disputes Tribunal award of 2007. The six-week period ended on March 29.