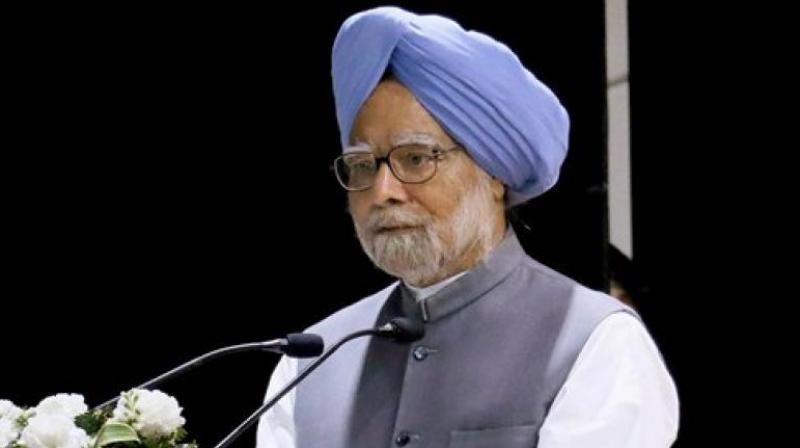 Former prime minister Manmohan Singh delivers lecture on '70th Anniversary of our Independence-Strengthening the Roots of our Democracy' during the Ist Prof. S.B. Rangnekar Memorial Oration at Punjab University in Chandigarh on Wednesday. (Photo: PTI)

Chandigarh: Former Prime Minister Manmohan Singh on Wednesday said there was widespread concern that the country's electoral system was being undermined by the use of money and muscle power and stressed on the need to effect electoral reforms to check the menace.

Addressing the first SB Rangnekar Memorial Oration at the Panjab University, his alma mater, Singh said India's electoral system has succeeded against great odds and has destroyed feudal systems of government. It has opened up opportunities for the common man, without any social, economic or political privilege whatsoever by birth, to occupy the highest positions of power, he said.

"There is, however, today widespread concern that our electoral system is being undermined by money power and muscle power," he said addressing the gathering in Chandigarh.

"The faith of the people in democratic elections as the best system to select a government that would govern in the common interest is today being eroded as much by a sustained campaign to attack democratic institutions and elected representatives as by the increasing political corruption and the capture of political parties and elected office by vested interests," he said.

Electoral reforms to cleanse elections of money and muscle power and to maintain integrity of elected officials are vital areas for securing and strengthening India's democracy, said the former prime minister.

Talking about renewing commitment to democracy, Singh invoked BR Ambedkar and said, "Democracy requires not only that all of us must get involved, but that we must each ensure that everyone has an equal voice."

The topic of Singh's address was: The Seventieth Anniversary of our Independence - Strengthening the roots of our Democracy.

"We need to ask ourselves whether we are losing patience with democracy and turning to more authoritarian alternatives that may well yield superior short-term results but in the long term will end up destroying our country and all the achievements of the last seventy years," he said.

"Governance is complex. It is messy. It is slow. Its benefits are long term. It requires great patience. Above all, democracy is a system in which people without privilege have a decisive voice in governance. If this is lost, democracy becomes meaningless," said Singh.

"Democracy requires not only that all of us must get involved, but that we must each ensure that everyone has an equal voice," he said.

Dwelling on the issue of equality, Singh said it is the keystone of democracy.

"And it is one of the greatest challenges faced by India in building our democracy because of the persistence in our society of feudal, hierarchical ideas of inequality based on caste, class and gender."

"If we continue to deny it for long, we will do so only by putting our political democracy in peril. We must remove this contradiction at the earliest possible moment or else those who suffer from inequality will blow up the structure of political democracy which this Assembly has so laboriously built up."

Singh said that the country's first Prime Minister Jawahar Lal Nehru warned in 1952 in one of his letters to chief ministers, "if poverty and low standards continue then democracy for all its fine institutions and ideals, ceases to be a liberating force."

"The economic liberalisation that I was associated with in 1991-1996 (as the finance minister) and 2004-2014 (as the prime minister) was, above all, a process of opening up new opportunities for people born without social and economic privilege. This was for me the guiding vision behind our economic reforms," he said.

He said democracy is more than a system of governance.

"Equality, freedom and fraternity are the three values that constitute the life breath of democracy - its very essence," he added.