Cold response to upper caste bandh; clashes in some states 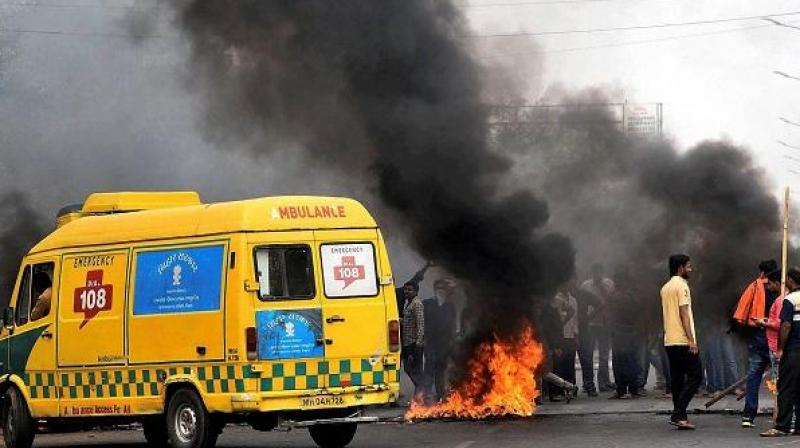 Jaipur/Lucknow/ Bhopal: The nationwide anti-quota Bharat Bandh called by upper caste groups on Tuesday evoked a tepid response amid heavy security arrangements. There were stray reports of clashes in Bihar that left 12 people injured and some attempts to block trains.

Though shops remained closed in some parts of Madhya Pradesh and Rajasthan for a few hours and internet services were restricted in sensitive areas to check “rumour-mongering”, normal life remained largely unaffected, officials said.

These two states had borne the maximum brunt of the protest by dalit outfits on April 2 against a recent Supreme Court order, resulting in death of 11 people, including eight in Madhya Pradesh. Dalit organisations had alleged that Supreme Court’s order on , had diluted its provisions on immediate arrest of accused in cases of atrocities against members of marginalised sections. Tuesday’s bandh call, given largely through social media, was supported by Sarv Samaj, a grouping of brahmins, rajputs, jats and gujjars, to protest against job quotas and condemn the violence during the dalit agitation on April 2.

In Uttar Pradesh, life by and large remained normal. Internet services were suspended in Saharanpur, Muzaffarnagar, Shamli and Hapur. In Firozabad district, the administration had asked schools to remain closed as a precautionary measure. Extra security forces were deployed in some districts, sources said.

In Rajasthan, the state government had issued prohibitory orders and blocked mobile internet services in Jaipur as a precautionary measure.

In Madhya Pradesh, daytime curfew was imposed in Morena and Bhind, from where casualties were reported during the dalit bandh on April 2. Prohibitory orders were in place in Gwalior, Bhopal, Sagar and some other towns of the state. Internet services were restricted in the Gwalior-Chambal region to prevent rumour-mongering, officials said.

“There has been no im-pact of the alleged bandh so far. The state police is also keeping a watch on the social media,” MP home minister Bhupendra Singh told reporters in the afternoon.

In Gujarat, the bandh evoked a lukewarm response with most establishments and markets staying open in major cities and towns, an official said.

The Union home ministry had on Monday issued an advisory to all states to beef up security and prevent violence during Tuesday’s Bharat Bandh.