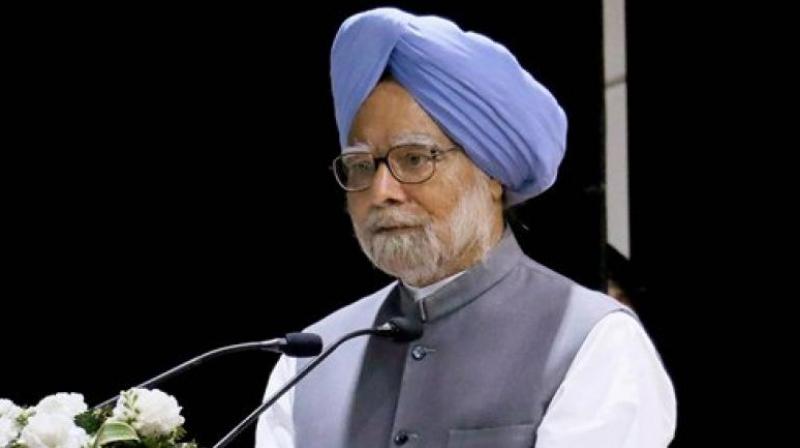 Former prime minister Manmohan Singh delivers lecture on '70th Anniversary of our Independence-Strengthening the Roots of our Democracy' during the Ist Prof. S.B. Rangnekar Memorial Oration at Punjab University in Chandigarh on Wednesday. (Photo: PTI)

Chandigarh: Former Prime Minister Manmohan Singh on Wednesday said atrocities against minorities and Dalits were increasing in the country and such incidents, if unchecked, could harm democracy.

Delivering the first SB Rangnekar Memorial lecture at the Panjab University, his alma mater, in Chandigarh, Dr Singh also said a "dangerous and false binary" of choosing between freedom and development was surfacing in the country's political discourse and that it must be rejected.

He expressed concern over the alleged attempts being made to divide people.

"I need not dwell long on the current deep concern that attempts are being made to divide the Indian people on the basis of religion and caste, language and culture. Atrocities against minorities and Dalits are increasing. If unchecked, these tendencies can only harm our democracy. As a people, we must strongly reject divisive policies and politics," he said.

He stressed that without a firm commitment to this idea of freedom, democracy would not survive.

Invoking BR Ambedkar, he said there was a need to reassert commitment to maintain India's freedom and Independence.

"We must preserve strategic autonomy in decision-making processes and resist the temptation of rich rewards gained by becoming a tool in the great games of big powers in the pursuit of their imperial ambitions. We need to rebuild our commitment to maintaining India's freedom and Independence, based on individual freedom and independence of every Indian citizen," Dr Singh said.

A dangerous and false binary "that we have to choose between freedom and development" was surfacing in the Indian political discourse, he said, "which must be firmly rejected".

"The argument was put to Mahatma Gandhi, the Father of our Nation, that good governance and development are better than swaraj (self rule)," he said, adding, that the people of the country firmly rejected the idea advanced by colonial forces.

"It (freedom) is, as our founding fathers proclaimed early in our freedom struggle, 'our birth right' on which we shall never compromise. Growth, wealth and development are fruits of democracy, not substitutes," he said.

"While economic growth remains a high priority for the country, there is now a growing concern that the concomitant commitment to ensuring that disparities and inequality do not grow is weakening. This can be a serious potential threat to our democracy.

"What is required is stronger social and political reawakening to the principle of equality - social, economic and political - for the sake of equality and as a mark of our commitment to democracy. In the short term, pro-equality policies may make growth more expensive, but the growing inequality is, in the long term, a far greater danger to economic well being and sustained growth."

Dr Singh was addressing the gathering on the topic: The Seventieth Anniversary of our Independence - Strengthening the roots of our Democracy. Rangnekar was one of the founders of the economics department of the university.