Police sources said that clashes between a group of Lashkar-e-Taiba militants and security forces broke out on Wednesday morning. 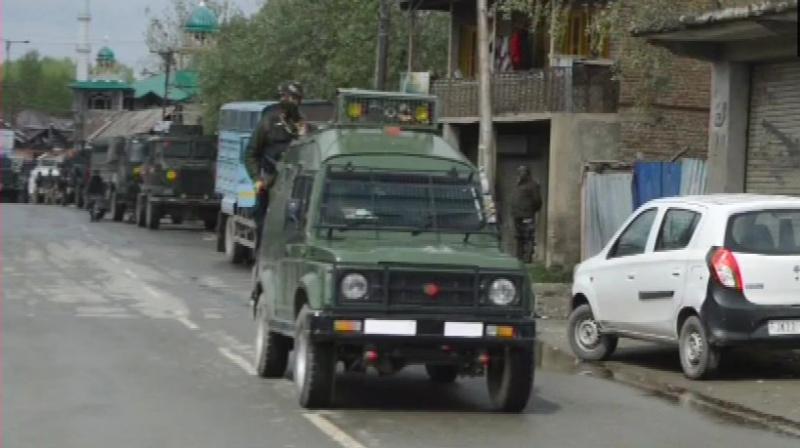 Security forces launched a cordon and search operation in the district's Khudwani area on Tuesday night, following information about presence of militants there, the officials said. (Photo: ANI | Twitter)

Srinagar: Three civilians and an Army jawan were killed during a fire fight and simultaneous street clashes in Jammu and Kashmir’s southern Kulgam district on Wednesday morning.

The police sources said that the clashes between a group of Lashkar-e-Taiba (LeT) militants and the security forces broke out on Wednesday morning after the latter laid siege to Wani Mohalla of Khudwani area in Kulgam.

At least, two gunmen are believed to have been trapped inside a private house.

The officials said a cordon-and-search operation was launched jointly by the Army’s 1 Rashtriya Rifles, the counter-insurgency Special Operations Group (SOG) of the J&K police, and Central Reserve Police Force (CRPF) following a tip off about the presence of militants in Wani Mohalla. While soldiers were moving into the locality, gun shots were heard and this ensued the encounter, said a local resident.

During the initial exchange of gunfire, three security personnel suffered grievous injuries, the sources said adding that they were rushed to Srinagar’s 92 Base Army hospital where one of the Army jawan succumbed to his injuries.

While the fire fight was underway, surging crowds made repeated attempts to relocate to the encounter site and soon clashed with the security forces, the officials said.

The security forces opened fire on alleged stone-pelters, killing three persons including 16-year-old Bilal Ahmad Tantray of Qoimoh village of Kulgam. The other slain civilian has been identified as Sharjeel Ahmad Sheikh. The third youth, Faisal Illahi, who was injured in the shooting succumbed to his injuries in a local hospital.

The police officials said they may have been caught in crossfire between holed up militants and security forces but added that proper investigation alone will determine how they were killed.

The Army said that the identity of the deceased soldier will be disclosed only after family members were informed about his death.

Reports stated that the security forces also used batons and fired teargas canisters and pellet shotguns to quell the protests, injuring about 35 people.

Meanwhile, the authorities have placed key separatist leaders under house arrest, closed educational institutions in Kulgam and in a neighbouring district. It has also suspended train services between Srinagar and Banihal and snapped mobile internet services in southern parts of the Valley.

The civilian killings in Kulgam have sparked off protests in some other parts of the Valley including north western town of Sopore.