Justice Chandrachud observed that children between 11 and 20 are seen and in cases students up to 28 years are in the crowd. 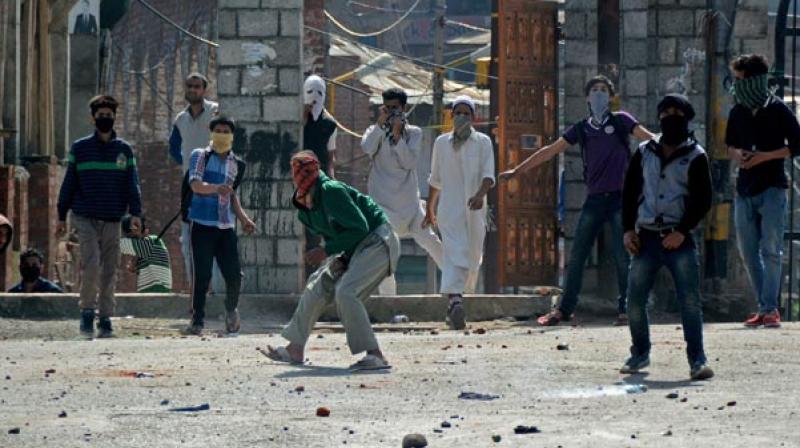 The Jammu and Kashmir High Court Bar Association had earlier alleged that the pellet guns are being 'misused'. (Photo: PTI)

New Delhi: The Centre on Monday told the Supreme Court that pellet guns are used only as a last resort to disperse protesters and mobs in Jammu and Kashmir and alternative methods like “rubber bullets” and “skunk water” mixed with chemicals are being experimented.

Attorney-general Mukul Rohatgi made this submission before a three-judge bench of Chief Justice J.S. Khehar and Justices D.Y. Chandrachud and Sanjay Kishan Kaul hearing the Jammu and Kashmir High Court Bar Association’s plea against the use of pellet guns in the state. He said the intention is not to kill the protesters but only to disperse the crowd.

In the last hearing on March 27, the top court expressed concern on largeshcale use of pellet guns on protesters and had asked the Centre to consider effective means other than use of pellet guns to deal with mobs as it concerns life and death.

Justice Chandrachud observed that children between 11 and 20 are seen and in cases students up to 28 years are in the crowd.

Senior counsel Mian Abdul Quayoon representing the j and K bar association alleged that the security forces use pellet guns indiscriminately and in an arbitrary manner and more than 15,000 persons had been injured.  The CJI said if guns had been used over 20,000 people would have been killed.

Counsel however, maintained due to the indiscrimiante use of pellet guns, children and students are losing their eyes and a situation may come that J and K will be a nation of bllind people.

The AG said a new Standard Operating Procedure has been put in place with guidelines for the CRPF to use graded response while dealing with violent mobs. He said even yesterday in the bye-elections the security forces had to face with violent mobs and more than 100 security personnel were injured when attempts were made to capture polling booths. As a result of the violence only 7 per cent polling was witnessed.

The AG said “we are experitmentting alternative methods like rubbr bullets and used of `skunk water’ mixed with chemicals which has been proved effective in Israel.” He said there is no peaceful protest in J and K as every protest is marred by violence and different methods had to be used depending upon the situation. The AG said in a war like situation it is not possible to distinguish between terrorists and others, who attack security forces from all sides. Pellet guns are used only a last resort if the forces find it difficult to handle the situation. It may not be possible to visualise a situation when it can be used or not.

The Jammu and Kashmir high court had on September 22, 2016 rejected the plea seeking a ban on use of pellet guns on the ground that the Centre had already constituted a Committee of Experts through its memorandum dated July 26, 2016 for exploring alternatives to pellet guns. The present appeal by J and K bar association is against this order.  Observing that it is an important issue, the Bench granted time to the Associaiton to file its reply and posted the matetr for further hearing on April 28.