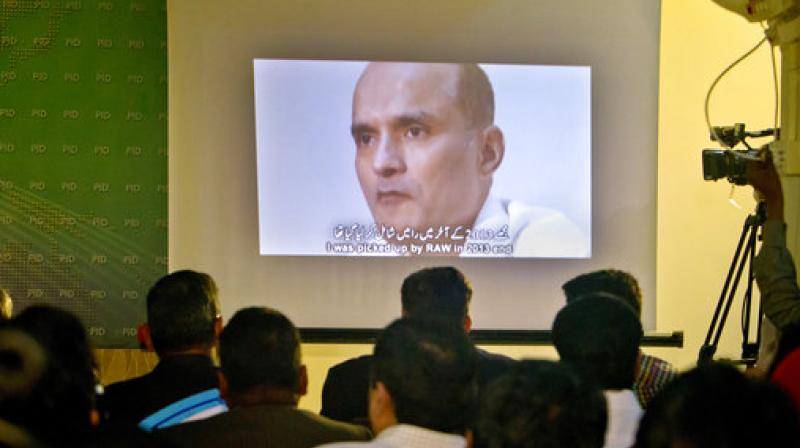 New Delhi/Islamabad: Pakistan’s powerful military establishment announced on Monday that former Indian naval officer Kulbhushan Jadhav would be hanged after a “military court” found him guilty of “espionage and sabotage”, in a move that quickly raised tensions between the nuclear-armed countries.

India slammed the decision and said in a demarche to Pakistan’s high commissioner Abdul Basit that Mr Jadhav was “kidnapped last year from Iran”, and his trial was “farcical” in the absence of any evidence against him. Foreign secretary S. Jaishankar summoned Mr Basit and handed over the demarche.

India said if the death sentence was carried out, New Delhi would regard it as a “case of premeditated murder”.

Sarabjit Singh, on death row for 16 years for spying in Pakistan, was killed in jail in 2013 allegedly by fellow inmates. 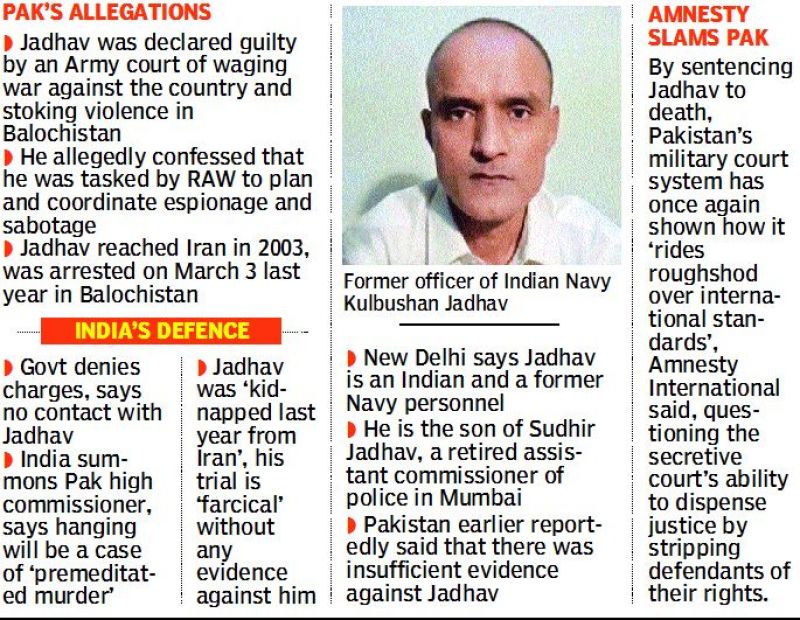 In case of Mr Jadhav, India also pointed out that consular access had been repeatedly denied by Pakistan despite 13 requests in the past one year, and that New Delhi was not even made aware that Mr Jadhav was being brought to trial.

Pakistan military’s mouthpiece, the Inter-Services Public Relations (ISPR), said the death sentence had been confirmed by Pakistan Army Chief General Qamar Javed Bajwa. A security official told AFP that the court-martial had been kept secret even within the ranks of the military.

Pakistan has termed Mr Jadhav an agent of India’s external spy agency RAW, and has claimed that he is still a serving naval officer, while India has said he was a former naval officer.

Indian government sources had said last year that Mr Jadhav became a businessman, and stayed in Iran after retiring from the Navy. India said he was abducted from Iran on the orders of Pakistani intelligence agencies.

Pakistani military courts have a notorious reputation for being kangaroo courts. It remains to be seen if India seeks global intervention through the UN or the United States to stop the hanging. Pakistan’s latest move is bound to exert tremendous strain on Indo-Pak ties.

In a statement from Rawalpindi, the ISPR said, “Indian RAW agent/naval officer commander Kulbushan Sudhir Jadhav alias Hussein Mubarak Patel was arrested on March 3, 2016 through a counter-intelligence operation from Mashkel, Balochistan, for his involvement in espionage and sabotage activities against Pakistan.”

“The spy has been tried through the field general court martial under the Pakistan Army Act (PAA), 1952, and awarded the death sentence. Jadhav was tried under Section 59 of the PAA and Section 3 of the Official Secrets Act of 1923,” the ISPR said.

“He confessed before a magistrate and the court that he was tasked by the RAW to plan, coordinate and organise espionage/sabotage activities aiming to destabilise and wage war against Pakistan by impeding the efforts of law enforcement agencies for restoring peace in Balochistan and Karachi,” it said.

A few months ago, the Pakistan PM’s adviser on foreign affairs Sartaj Aziz was reported to have said that there was insufficient evidence against Mr Jadhav, but he later changed his tune, apparently under pressure from the Pakistan Army.