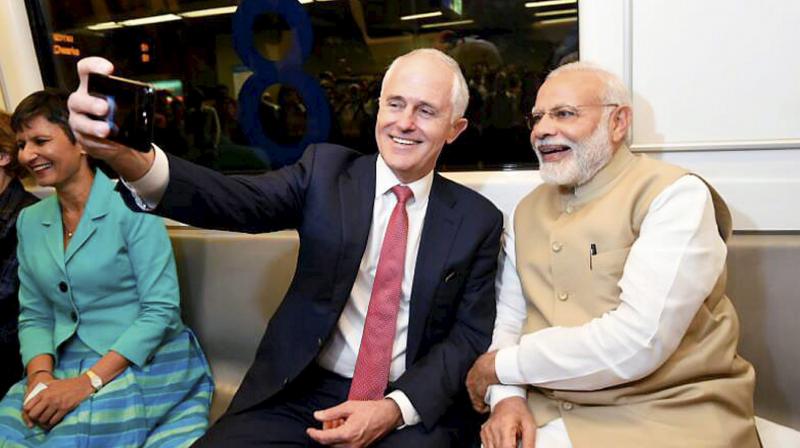 New Delhi: With an obvious eye on China, both India and Australia on Monday focused on peace and prosperity in the Indo-Pacific region. Both nations underscored the need to uphold the “maritime legal order based on the 1982 United Nations Convention on the Law of the Sea (UNCLOS)”, even as the two countries — during the ongoing visit of Australian Prime Minister Malcolm Turnbull — signed six pacts, including an “MoU on cooperation in combating international terrorism and transnational organised crime” and another “MoU for promotion and development of cooperation in civil aviation security”.

After talks between Prime Minister Narendra Modi and Mr Turnbull, the two countries, in a joint statement, said the “two Prime Ministers welcomed continued and deepened trilateral cooperation and dialogue among Australia, India and Japan” and that “they agreed to invest in trilateral consultations with third countries to enhance regional and global peace and security”. This will no doubt be keenly watched by China which fears that India, the US, Australia and Japan are forging an alliance to contain it.

During their talks, the two leaders decided to significantly expand their ties in several key areas, including defence, trade, energy and education. The MoUs signed also provided for deeper cooperation in areas of health and medicine, sports, environment, climate and wildlife, civil aviation security and cooperation in space technology. The visit was also high on the cultural component, with the two leaders visiting the iconic Swaminarayan Akshardham Temple in east Delhi and taking a Metro ride to reach the landmark.

However, no breakthrough was reportedly achieved on a comprehensive economic cooperation agreement (CECA) during talks between the two Prime Ministers, with PM Modi saying, “We took a number of forward-looking decisions to further strengthen our partnership, including the decision to soon hold the next round of negotiations on our Comprehensive Economic Cooperation Agreement.”

Using the cricket analogy, PM Modi, in a lighter vein, said “I am, of course, glad that our decisions are not subject to the DRS review system.” On CECA, Turnbull did not give a timeline for the deal but said, “I think it’s fair to say that progress has not been as fast as either of us would have liked.”

On the threat of terrorism, the two leaders asserted that the fight against terrorists, terror organisations and networks should also identify, hold accountable and take strong measures against those who encourage, support and finance terror, provide sanctuary to terrorists and terror groups, and falsely extol their virtues.

“Both leaders recognised that India and Australia share common interests in ensuring maritime security and the safety of sea lines of communication. Both leaders recognised the importance of freedom of navigation and overflight, unimpeded lawful commerce, as well as resolving maritime disputes by peaceful means, in accordance with international law, including UNCLOS,” the Joint Statement said.

“They looked forward to the inaugural secretaries’ defence and foreign affairs dialogue in the “2+2” format as a new mechanism to build on the deep strategic partnership. As the Defence relations expand, enhanced defence representation is envisaged on both sides over the coming years,” it added.

“Prime Minister Turnbull noted the significant contribution of the Indian diaspora in Australia, both in economic and cultural terms. With increasing two-way tourist numbers, both Prime Ministers noted that people-to-people links are vital to promoting mutual understanding and respect between the two countries,” it further said.