India   All India  11 Mar 2019  When TV studios played war games and the sane viewer got a bad name
India, All India

The outrage and sorrow at the mindless and needless killing of our brave CRPF men was no doubt overwhelming. 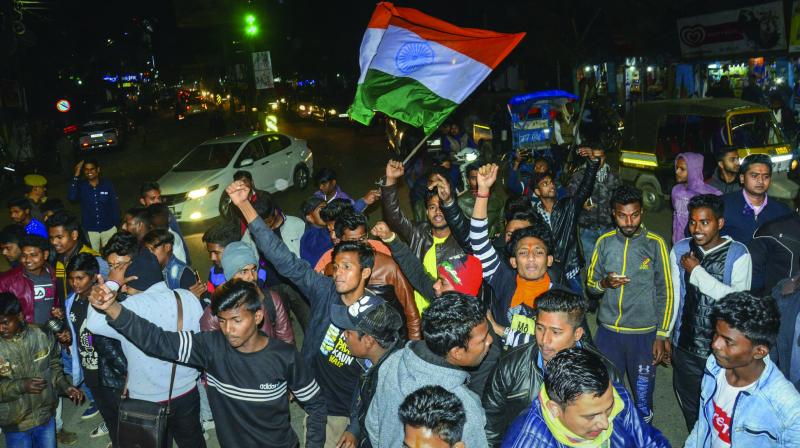 People celebrate in Dibrugarh after the IAF’s strike in Balakot on JeM camps. (Photo: PTI)

On February 14, 2019, we lost 40 Central Reserve Police personnel to a heinous suicide bomb attack. The convoy was travelling on the Jammu-Srinagar national highway when it was attacked by a car-borne suicide bomber at Lethpora in Pulwama district of Jammu and Kashmir, India.

The Jaish-e-Mohammed perpetrated this horrible incident. Even as we came to grips with the horror unfolding on the TV screens, the television channels went to war with Pakistan. Not only the channels, WhatsApp messages were churned out in such a frenzy that one could barely pause to breathe. Everybody was raring for war. Everybody became the epitome of the roles Sunny Deol plays in popular Hindi cinema. Everybody was of the opinion that Pakistan was a mere coincidence and a blip in our history and could be snuffed out if India merely breathed upon it. And that it must be snuffed out.

But the really alarming outcome of this event was how war began to play out in our drawing rooms. How fake images of torn limbs intertwined in wreckage flooded our phones. How the gore and flesh was used to anoint our altars of patriotism and sense of nationalism. A heavily-moustachioed ex-general of the Army spewing fire and venom and another pinning down Pakistan with a trident became a popular meme. The screaming and shouting, calling for war, reached deafening proportions.

The photographs of the CRPF men who died in Pulwama found their way into election posters and also found mention in election speeches of the ruling party. The noise was so loud that in the din, any questions about why security had been breached in so grievous a manner and why heads should not roll for failing these men and putting them in such a vulnerable spot were lost or not asked often enough. Because in these troubled times, any questions immediately got a thinking mind slotted as “anti-national”.

While cries rent the air about how Kashmir was our and only ours, Kashmiris themselves were ironically hounded out of hostels, thrown out of jobs, harassed and even beaten up across the country by people who called themselves true Indians. This frenzy for revenge had painted them in anti-national colours. People like me hung our heads in shame as these videos began to pour in. Irony had never been more tragic.

A friend said in a worried voice that she did not want war. Her sons were both enlisted in the Army. She wrote this on a WhatsApp group where her friends were baying for blood while secretly getting manicures and pedicures. The tone of her message was tremulous and shaking with concern. She was hounded…

All the time in the backdrop, the media went to war. Some TV channels seemed like they were actually firing gunshots at the border right from their studios.

Warmongering had reached a peak.
You see there is this thing about going to war.
It is, of course, a way to ensure that the nation is protected; its people safe and its sovereignty intact. But it is also the very, very last resort. Our land is one where the great Emperor Ashoka fought the Kalinga and then stood at the edge of the bloodied battlefield realising its futility and hopelessness. It is the land where epics like The Mahabharata have been written — a tale only about war and the complete destruction it brought in its wake. We still shudder at the plight of young Abhimanyu.
It is by the dint of sheer bravery, an abiding sense of duty and a deep love for the land that our men in uniform protect our borders, even at the risk to their lives.
And it is because of pure courage that the king does not send them to spill their blood.
This is why diplomacy was born. To prevent war.

Our men retaliated. Our Air Force dropped a huge payload of bombs on the enemy land, targeting terrorist camps. Our wing commander was taken captive.

The TV channels went to town again with renewed vigour. The enemy was nothing compared to our might. The Geneva Convention was evoked. But for it, the government had to accept the wing commander was a prisoner of war. But, the government had attacked only terrorist outfits. Which did not make it war. And which did not make Wing Commander Abhinandan a POW. And the Geneva Convention only comes to force in wartime. When complete discretion was needed, the captive wing commander's personal details were screamed into our drawing rooms. With nary a thought as to how precarious his condition was till he had crossed back into our country, into his country, the premier of the enemy nation was called names, mocked and laughed at. Mind you, when our man was out there. The generals on TV spewed their fire and aired their ire. No discretion whatsoever.

Our Prime Minister called it a Pilot Project, promising escalation. And then when the wing commander's return was delayed, millions of nails were bitten to the quick wondering if Pakistan was playing a game. Whither maturity? Whither sense and whither maturity? Couldn't they have waited before waving their toy guns before cameras? But these protests could not be made, even in the relative safety of drawing rooms, by anyone who cringed at the warmongering. How could those of moderate thought even speak without the fear of being branded on their foreheads as traitors?

Nothing has changed. Firing is still on at the border. People are still dying. The waters have been muddied, even more than before.

In this day and age, with such weapons, a full-blown war is unthinkable. But like I said, it takes too much courage not to go to war.