Araria is a muslim-dominated area with over 40 per cent of the population belonging to the religion. 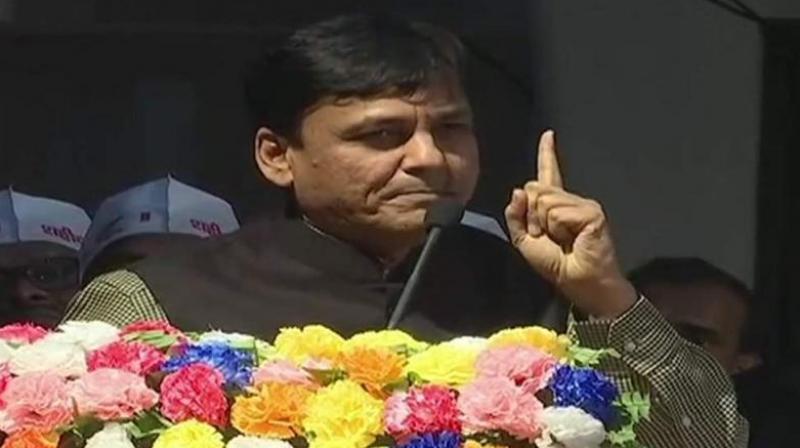 An FIR was lodged against Nityanand Rai for violating the model code of conduct by allegedly making provocative speech during campaigning for Araria Lok Sabha bypolls. (Photo: ANI/File)

Araria: Bihar BJP chief Nityanand Rai on Friday stoked controversy after he allegedly said, if the RJD candidate Sarfaraz Alam wins the by-election, Araria will become a safe haven for the ISIS.

An FIR was lodged against Rai for violating the model code of conduct by allegedly making provocative speech during campaigning for Araria Lok Sabha bypolls, an official said on Sunday.

On the last day of campaigning, Rai had allegedly said, "If Sarfaraz (RJD candidate) wins this election, Araria will become a safe haven for the ISIS (the global Islamic terror group). The victory of our candidate Pradip Singh will, on the other hand, give rise to patriotic fervour".

Araria is a muslim-dominated area with over 40 percent of the population belonging to the religion.

Rai is also a Lok Sabha member from Ujiarpur in Bihar.

Tiwary told news agency PTI that the statement shows the "desperation in the BJP, which is faced with the possibility of a defeat in Araria".

The Araria lok-sabha bypoll was necessitated by the death of RJD MP Mohammed Taslimuddin.

In Araria, Rashtriya Janata Dal (RJD) and the Congress is pitted against the BJP-Janata Dal (United) alliance. The bypolls are being seen as a litmus test for Chief Minister Nitish Kumar after he pulled out of the state's Grand Alliance and joined the BJP.