Strike called by a group of separatists brings life to standstill. 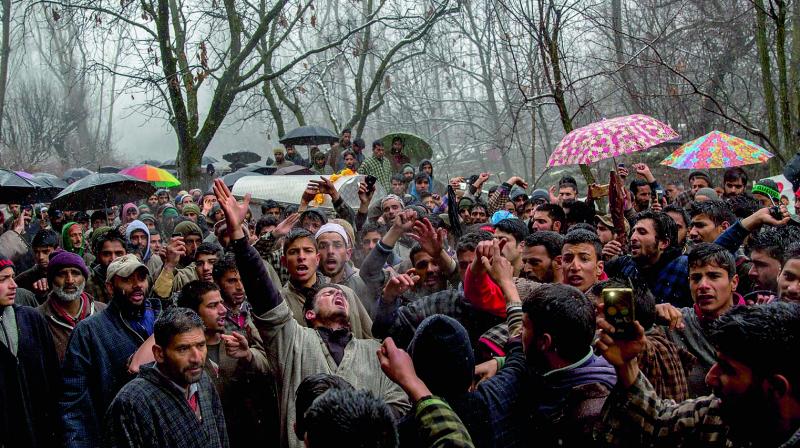 Srinagar: Kashmir was tense on Friday. A strike called by an alliance of separatist organisations threw life out of gear in summer capital Srinagar and most other parts of the Valley.

Shops and other businesses remained shut and only skeleton transport services were available on select routes. The trains services remained suspended too on the second consecutive day. At places including in Srinagar and north-western town of Sopore, irate crowds of youth clashed with security forces which fired teargas canisters and shotgun pellets to quell the stone-hurling mobs.

The tensions heightened following the death of three militants and two civilians, including a 15-year-old schoolboy Aamir Nazir Wani, in or during security forces actions at two different places in southern Pulwama and northern Bandipore districts. J&K’s director general of police Shesh Paul Vaid said the killing of militants was a “major breakthrough” against outlawed Lashkar-e-Tayyaba and Hizb-ul-Mujahideen outfits and claimed that the slain men were involved in killing of security officials and mainstream political activists besides bank robberies.

Chief minister Mehbooba Mufti expressed deep anguish and grief over the schoolboy’s killing. While extending her sympathies to the bereaved, she said, “It is highly unfortunate that youth are caught in the vicious cycle of violence in the State which has consumed so many precious lives and left behind a trail of death and destruction”.

The police said he was hit by a “stray bullet” during a fire fight with militants in Pulwama’s Pandgampora village. The locals alleged that the security forces fired live ammunition indiscriminately during the protests near the encounter site.

The young in the crowd were furious and pledged to take what they insisted is ‘freedom struggle’ of the people of Kashmir to its logic conclusion. Similar scenes were witnessed earlier in Pulwama on Thursday evening.

Almost all key separatist leaders were placed under house arrest ahead of the shutdown and Srinagar’s Grand Mosque was sealed to prevent Friday congregation at which Chief Muslim cleric and separatist leader Mirwaiz Umar Farooq delivers sermon and customary pre-Namaz speech on political and social issues. Earlier these leaders in their statements accused New Delhi of indulging in ‘worst state terrorism’ in Kashmir and using military might to suppress the voice of its people. Police chief Mr. Paul said that the operations against militants will not only continue but intensified in coming weeks.