SSB in line of fire on Nepal border 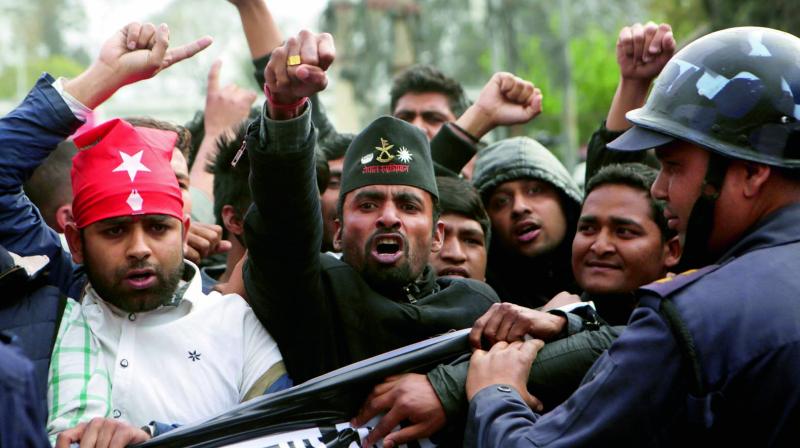 New Delhi: Sashastra Seema Bal, the border guarding force for the Indo-Nepal border, has ordered a court of inquiry into allegations of firing in which a Nepalese national was killed. Even though SSB has denied reports of any firing by its troops but since allegations were serious a fact finding inquiry has been ordered. The probe will be conducted by a DIG-rank officer.

National security advisor Ajit Doval also called up Nepalese Prime Minister Prachanda and expressed his condolence over the death of Nepalese citizen while promising investigations into the incident.

Meanwhile, SSB claimed that situation along the border in Lakhimpur Kheri area remains tense and Nepalese people were shouting anti-India slogans. “It is alleged in the media that one Nepalese citizen has died due to SSB firing. The SSB officials concerned have denied any firing,” a statement by the security force said.

“The situation is tense today and a large number of Nepalese people have gathered on the spot again and resorted to shouting anti-India slogans and stone-pelting. Local officers and SSB officers are on the spot,” it added.

The ministry of external affairs has said that India has sought the post-mortem and forensic reports from Nepal of its national who is alleged to have been killed in SSB firing. The incident has led to protests in Nepal.

The SSB claimed that clashes were first triggered on Wednesday when some local Nepalese people gathered near pillar no 200 in the Basai area of Pilibhit and tried to construct a culvert.

Officials claimed that these people were stopped from carrying out any construction activity as earlier the authorities from both sides had agreed to allow construction of culvert only after conducting a joint geological survey.

“But yesterday, again in the morning, a group of Nepalese people gathered at same site and started pelting stones on SSB personnel and local police and administrative authorities on duty,” the SSB said. Nine SSB personnel and 34 Indian civilians were injured in the stone pelting incident.

Following the violence the local police fired a teargas shell, two were fired by the Nepal police to “disperse the crowd” on Thursday. The situation was brought under control by the intervention of the District Magistrate and Superintendent of Police of Lakhimpur Kheri and Nepalese authorities in Kanchanpur.

The SSB works under the command of the Union home ministry and is tasked with guarding the 1,751 km long Indo-Nepal border. Out of this Uttar Pradesh shares a 599.3 km long open border with Nepal touching seven districts- Pilibhit, Lakhimpur Kheri, Bahraich, Sravasti, Balrampur, Sidhharthnagar and Maharajganj.