'Every moment of our time, everything we do is for welfare & wellbeing of people of India. We believe in power of 125 cr Indians,' he said. 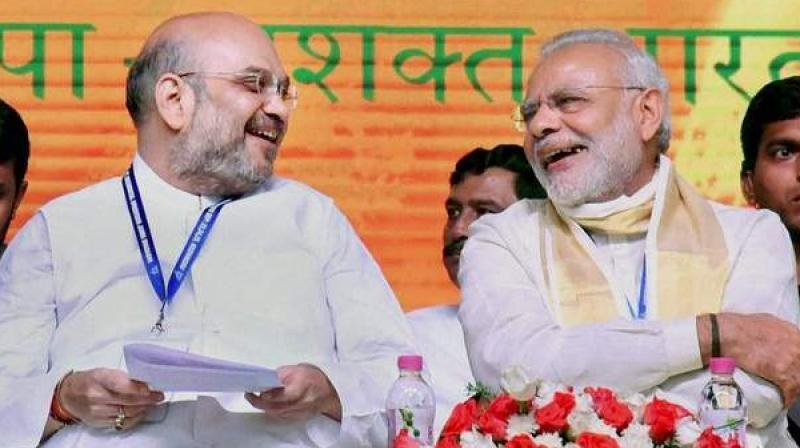 New Delhi: As the Bharatiya Janata Party (BJP) saw an unprecedented victory in Uttar Pradesh and Uttarakhand, Prime Minister Narendra Modi on Saturday took the occasion to thank for the support it gained from different sections of the society.

An overjoyed Prime Minister took to twitter to express his emotions. "Am overjoyed that BJP has received unprecedented support from all sections of society. Huge support from the youth is gladdening," he tweeted.

Modi also congratulated BJP chief Amit Shah and other party bearers for the their exemplary work in taking the party to new heights.

"I salute the hard work of BJP Karyakartas. They have tirelessly worked hard at the grassroots level & won the confidence of the people," he tweeted.

"Every moment of our time, everything we do is for welfare & wellbeing of the people of India. We believe in the power of 125 crore Indians," he added.

Prime Minister Modi took the occasion to thank the people of Punjab for giving the BJP-Shiromani Akali Dal (SAD) alliance the oppotunity to serve them for ten years. The rule of the alliance now comes to an end with the trends in Punjab show the Congress leading with 76 seats, the AAP leading in 23 seats and the BJP-SAD leading in 18 seats.

"I thank people of Punjab for giving @Akali_Dal_ & @BJP4Punjab the opportunity to serve for 10 years & for the support we got in these polls," the Prime Minister tweeted.

So far, the trends show the BJP gaining 317 out of 403 seats in Uttar Pradesh, with the Samajwadi Party-Congress alliance getting 57 seats and Mayawati-led Bahujan Samajwadi Party (BSP) 19 seats.

In Uttarakhand, the BJP is leading with 56 seats.

In Goa, a close contest between the BJP and the Congress is brewing as the former has won 12 seats, while the latter is leading with 14.

In Manipur, the Congress is leading with 24 seats, with the BJP with 22.

Meanwhile in Punjab, Congress is leading with 74 seats, Aam Aadmi Party (AAP) 20, SAD 15 seats, and the BJP has got only three seats.