Tension has gripped town in Dhemaji district after attack on AASU office. 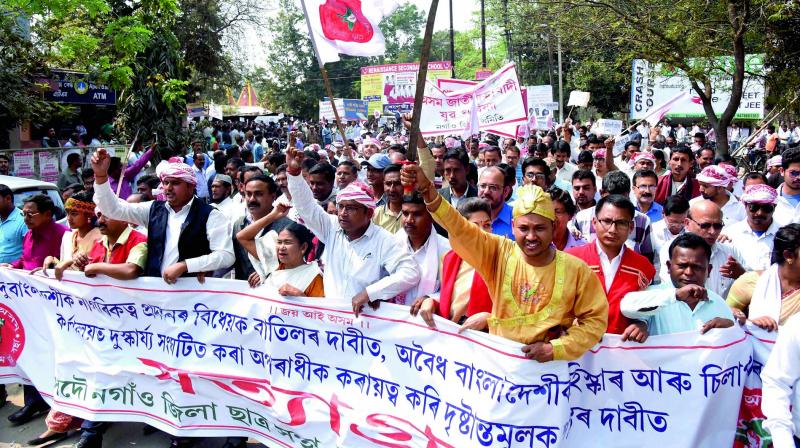 Activists of All Assam Students’ Union (Aasu) take out a satyagrah rally in Nagaon district of Assam on Friday in protest against the alleged vandalisation of its office at Silapathar by the members of a Bengali organisation. (Photo: PTI)

Informing that Assam police has announced a cash award of Rs 1-lakh for anyone who would provide vital information about the whereabouts of Subodh Biswas, the prime accused in the March 6 Silapathar incident, Mr Sahay said the police has already arrested about 30 accused. “We will nab Subodh Biswas soon,” he said, adding that measures have been taken to stop the situation from escalating; Section 144 has been imposed in Silapathar to maintain law and order. Fourteen companies of the Assam police battalion have also been deployed in Silapathar and several companies of paramilitary forces have been shifted from Jorhat and North Lakhimpur to Silapathar. Meanwhile, AASU staged a state-wide on Friday against the Silapathar violence.

The AASU leaders slammed the NDA government for advocating to grant citizenship to Bangladeshi Hindus. Senior AASU leaders who led the protest in Guwahati has also warned the state of serious consequences if the police failed to arrest Subodh Biswas. Normal life was affected in Upper Assam where several organisations called for a complete bandh.

Protestors burnt tyres and blocked roads at many places in Dibrugarh, while tension was prevailing in district towns as there were reports of miscreants intimidating residents of retaliatory violence.