India   All India  11 Feb 2019  The exquisite frescoes of Bundi: A glimpse of Krishna-Leela at Taragarh’s ‘chitrashala’
India, All India

The exquisite frescoes of Bundi: A glimpse of Krishna-Leela at Taragarh’s ‘chitrashala’

The Taragarh Fort is known far and wide for its splendid frescoes, considered to be some of the finest paintings seen at palaces and forts in India. 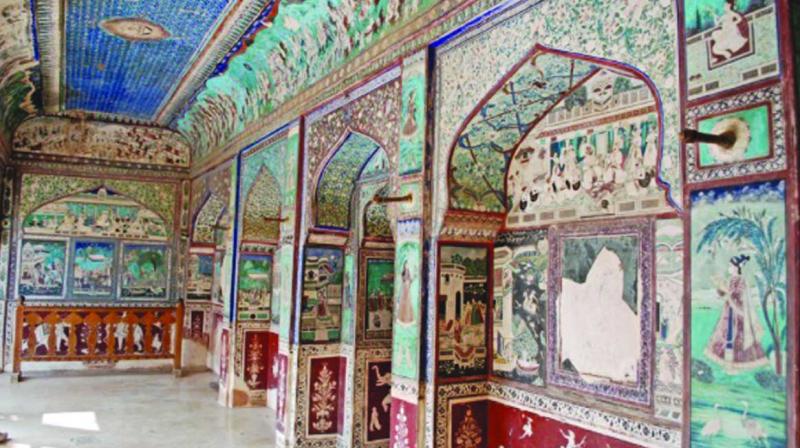 Walls that talk: Murals inside the palace and the ramparts of Taragarh Fort

The Hada Chauhan Rajputs of Bundi were royal Suryavanshis, who claimed to be descended from the sun. They ruled Bundi and a vast hilly region area spread around it from within the massive square-shaped Taragarh Fort, majestically poised high on the hilltop. From the ramparts of the Taragarh Fort, one can have a splendid view of today’s Bundi and surrounding hills, while marvelling at the creation of this massive fort on the steep hill that continues to stand guard over the city.

The Taragarh Fort is known far and wide for its splendid frescoes, considered to be some of the finest paintings seen at palaces and forts in India. Here the walls of its palace and the “Chitrashala”, are covered with colourful renditions on the theme of Krishna-Leela, and everyday depictions of the royal family. The unique Chitrashala is an art gallery with its walls and ceiling covered with the most amazing paintings, created in what we often refer to as the Kota style of miniature paintings.

The state of Bundi was founded in 1341 by Rao Deva. The massive Taragarh Fort dates back to his reign and work on his palace began around 1354. Successive rulers added their rooms to the palace, over the next 200 years, making it into one large palace with suites and rooms added at different levels on the hillside. What is interesting is that unlike other palaces in Rajasthan, there is very little Mughal influence in its architecture and the Fort represents a rare example of Rajput style — pavilions and kiosks with curved roofs, temple columns with carved brackets, covered with elephants and flowers. 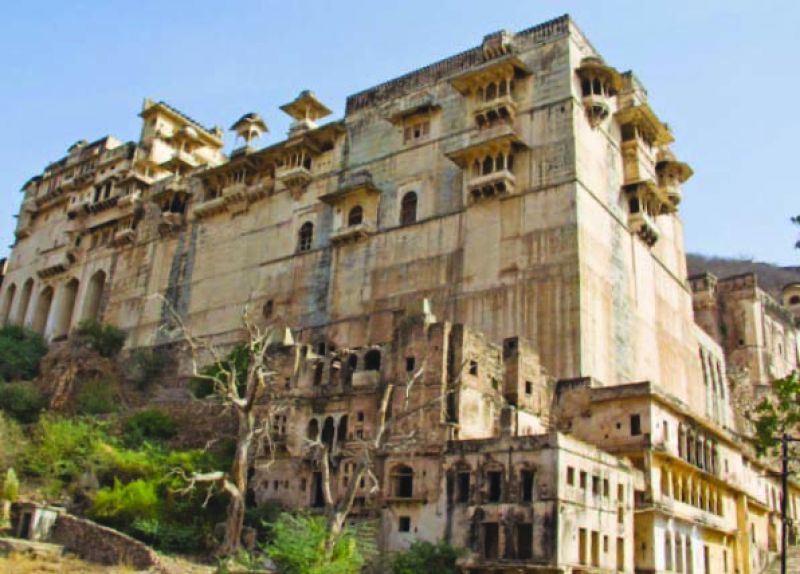 Even more interesting is the fact that instead of the sandstone used in building most Rajput palaces, the palace at Taragarh was built with a special green-tinged stone, quarried locally in Bundi. Since this was a very hard type of stone, instead of resorting to fine carving, the Bundi rulers decided to cover their walls and ceilings with splendid paintings. The Fort continues to be officially owned by the royal family and is entered through the imposing “Hathia Pol” (the Elephant Gate), flanked by two towers and topped by a pair of huge painted elephants. The most spectacular part of the palace is the Chattar Mahal built in 1660 and the Chitrashala — an arcaded gallery built between 1748 and 1770, overlooking a hanging garden.

As is the case with many of our ancient buildings, here too there is an urgent need for repair. The Archaeological Survey of India (ASI) has managed to do some work over the years and appear to be taking good care of the frescoes on the walls of the “Chitrashala” — previously known as Ummed Mahal after Maharaja Ummed Singh. Since it was taken over by the ASI, it is being beautifully maintained with a garden and a fresh-looking green lawn. 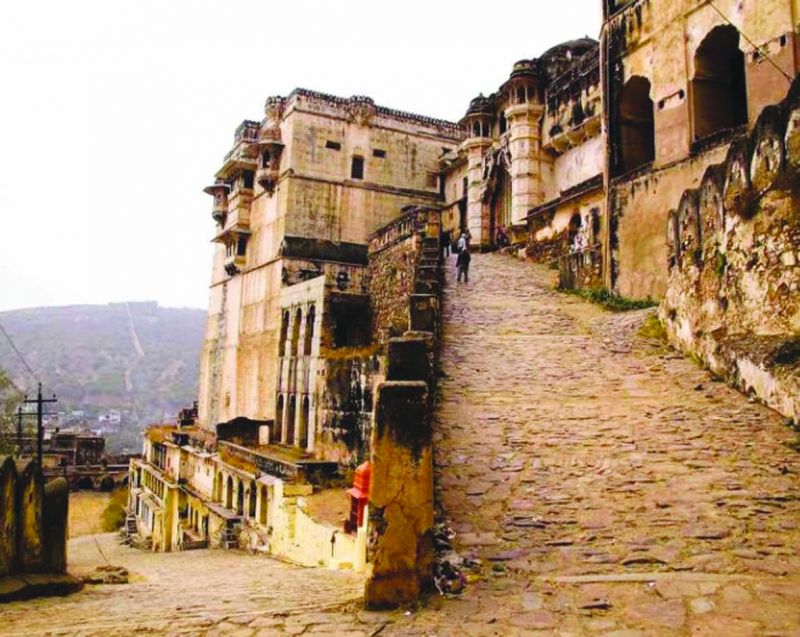 Art historians are known to say that the Bundi style of painting is unique as it has “borrowed elements from the miniature art forms of the Deccan”. Here one can see splendid scenes of royal activity, hunting, festivals, processions, court life, animals, birds and along with these, one can see plenty of landscapes — including forests, lakes, flowers and gardens. Some of the finest frescoes were based on the Krishna-Leela theme. With my keen interest in art, I was awed by the exquisite drawings and the use of glowing colours by the Bundi artists of yore — predominantly blue, green and touches of deep terracotta red and touches of yellow. On asking I learnt that pure silver and gold were used in the paintings, while the other colours were extracted from vegetables, fruit, minerals and precious stones.

The “Badal Mahal” (Palace of Clouds), built at the highest point in the fort, also has a fine collection of paintings on its walls. It is said that during the monsoons, the rain clouds were known to float through the courtyards of the Badal Mahal — hence the name of the palace. The palace is said to have been built by Rao Bhoj and this area with its steep stairway was Rao Bhoj’s harem — the “Zenana” or women’s quarters. The paintings on the walls and ceilings of Badal Mahal depict battle formations, rural life, fantastic beasts and heavenly creatures — along with scenes from a royal durbar. The centrepiece of the Badal Mahal is the ceiling of the Taragarh Fort’s topmost chamber. This has been referred to as “Rajasthan’s Sistine Chapel” and depicts in glorious detail Krishna and the Raas Leela.

But how was the tradition of miniature painting developed? There is an interesting legend that may be the answer. The existing tradition of miniature painting is said to have been given a boost in 1605, by three master painters who were sent to Bundi as a gift by Emperor Akbar. These painters, who had earlier made palm leaf manuscripts, may have been requested to change their style to painting on the walls. Whatever the reason, we must thank Emperor Akbar when we see the paintings at the Chitrashala and Badal Mahal. The legend may be a figment of the imagination, but it does make a good story!