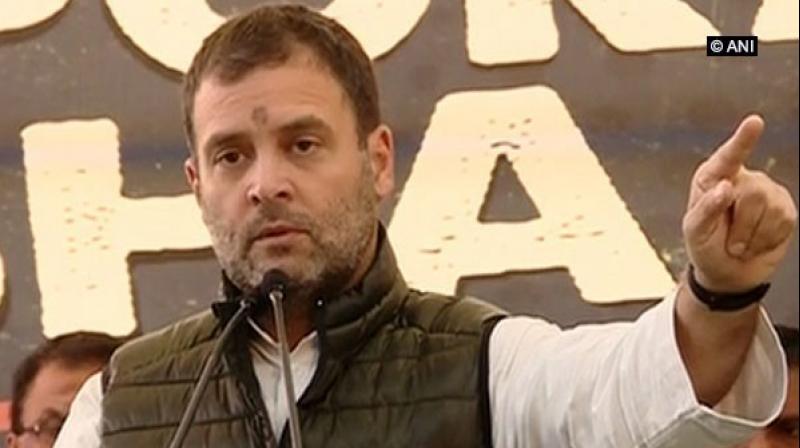 New Delhi: Congress President Rahul Gandhi on Monday asserted that Prime Minister Narendra Modi has facilitated loot in Rafale deal as according to a media report he had removed the anti-corruption clause from the controversial fighter jet deal.

Naidu, who is observing a day-long hunger strike, said: "Modi is acting shameless and egotistically. He is thinking to win elections by colluding with some party. Modi is unfit to rule the country, he is inefficient. Rulers should keep in mind the aspirations of people. Our fight is not for us individually, we are fighting for the sake of 5 crore people of Andhra Pradesh. Modi had to admit his mistakes, make proper allocations in the appropriation bill (budget). Otherwise, the BJP will lose its base in Andhra Pradesh forever."

The Telugu Desam Party (TDP) chief is observing a day-long dharna here today against the central government over the issue of special status to Andhra Pradesh.

While addressing the gathering, Naidu, whose party pulled out of the NDA last year, alleged that the Centre is discriminating against Andhra Pradesh.

The Chief Minister asserted that the TDP came to the national capital to explain to the nation the "injustice" done by the Centre to Andhra Pradesh.

Naidu "warned" the Centre and Prime Minister Modi to "stop attacking an individual" and said that the BJP will be washed out from Andhra Pradesh forever.

He claimed that the BJP is trying to divide the nation while the TDP is in the national capital to make people aware of the injustice being meted out to Andhra Pradesh.

The TDP pulled out of the BJP-led NDA over the "injustice" done to Andhra Pradesh after its bifurcation.

Termed 'Dharma Porata Deeksha' (a day-long protest for justice), the strike is being held at the Andhra Pradesh Bhavan in Delhi. It is expected to go on till around 8 pm.

As per an official statement, Naidu will be submitting a memorandum to President Ram Nath Kovind on Tuesday.

Naidu, who has been pressing for special category status for Andhra Pradesh for long, had earlier staged similar protests against the Centre.

In October 2013, Naidu had staged an indefinite fast at the Andhra Pradesh Bhavan here, demanding that if a separate state is carved out of then unified Andhra Pradesh, both should get equal rights. On the fifth day of his protest, he was forcibly shifted to Ram Manohar Lohia Hospital after his health deteriorated.

He had also observed a fast in Vijayawada in April last year demanding special status for the state.