Chinook copters arrive from US

4 helicopters reach Gujarat port, to be deployed in Chandigarh. 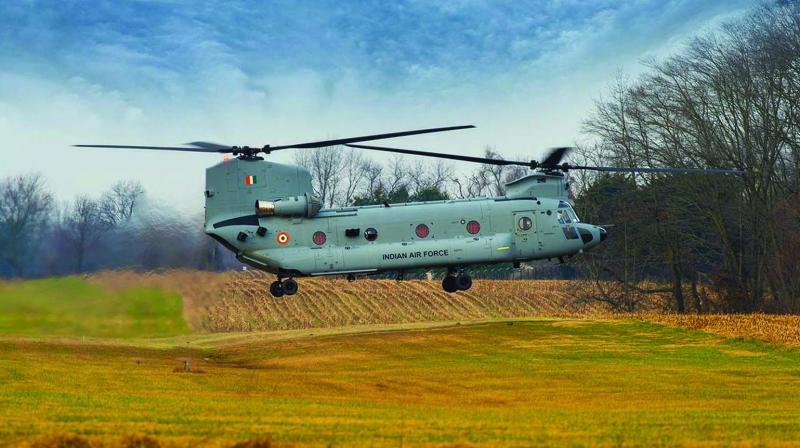 Chinook helicopters have been used by the US Army service since 1962 and were also deployed in Vietnam.

New Delhi: In what will boost India’s airlift capability during combat missions, the first batch of four Chinook military helicopters for the Indian Air Force arrived at the Mundra Port in Gujarat on Sunday.

These are one of the most modern heavy-lift choppers in the world. Its primary mission is to move troops, artillery, am-munition, barrier materials, supplies, and equipment on the battlefield.

At present, India has been using the Soviet-origin Mi-26s for the missions. India had finalised a mega contract with Boeing to procure 22 Apache helicopters and 15 Chinooks for the Indian Air Force in September 2015. The rest 11 Chinooks are expected to be delivered later this year.

The CH47F (I) Chinooks will be ferried to Chandigarh, where they will be formally inducted into the Indian Air Force later this year. Last month, a handover ceremony of Chinooks to India was held at Philadelphia in USA.

Chinook helicopters have been used by the US Army service since 1962 and were also deployed in Vietnam.

The CH-47F Chinook helicopter has been certified combat-ready by the US Army and fielded to the first operational unit in July 2007. A central element in the Gulf War, they continue to be the standard for the US Army in the global campaign against terrorism. Since its introduction 1,179 Chinooks have been built.

Its tandem rotor configuration also provides exceptional handling qualities, which enable the CH-47 to operate in climatic, altitude, and crosswind conditions that typically keep other helicopters from flying.

These can also be used for humanitarian and disaster relief operations and in missions such as transportation of relief supplies and mass evacuation of refugees.