In the last five years, more than 2,500 people have died from various types of cancer in the Kashmir Valley alone 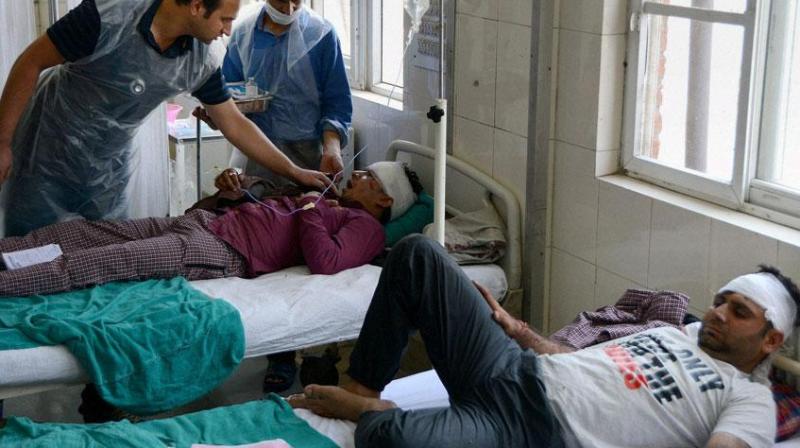 Srinagar: The healthcare in Jammu and Kashmir is lagging far behind, causing agony to over 13 million residents and at a time when cases of cancer, cardiac, renal failures and psychiatric disorders have witnessed an alarming increase.

In the last five years, more than 2,500 people have died from various types of cancer in the Kashmir Valley alone and nearly 20,000 others were diagnosed with the deadly decease during this period.

Official statistics and those collected by various health NGOs and human rights groups also say that there has been eleven-fold increase in psychiatric diseases due to the ongoing conflict and 70-80 per cent of all cases of acute depression are women.

While the rural areas are still underserved despite better funding from the government, the tertiary care is ailing too for varied reasons. One of the reasons being more and more doctors and medical specialists are opting to leave the state. They are mostly moving to the West and other wealthy countries for better income.

The government acknowledged the fact that large number of doctors and paramedical professionals have left the state to work in other countries as there they can earn up to 50 per cent, depending on their seniority.

Also, scores others went abroad for studies and did not return as there were better opportunities in the countries outside India. “All efforts to bring them back have failed. Serving notices did not work and the offer of sops and incentives back home could find only a few takers,” said a senior official of J&K’s health and medical education department, who spoke on condition of anonymity.

Come December, senior doctors abandon their places of work to evade the harsh winter of the Valley and go on sojourn within and outside the country. In some cases, the expenses on their trips within India and abroad are borne by various pharmaceutical companies or their local distributors, indicating the nexus between the two, despite the new guidelines of the Medical Council of India (MCI)

MCI’s new ethical guidelines under the Indian Medical Council (Professional Conduct, Etiquette and Ethics-Amendment Regulations, 2015) have made accepting freebies such as gifts and foreign jaunts from pharmaceutical companies punishable offence. While major national and multi-national companies strictly abide by it, it is mainly ‘small’, ‘fake’ and ‘unregistered’ ones that are contributing to ‘rot’ in the healthcare in the state. The alleged nexus between these pharma companies and unscrupulous doctors is also widely recognised as one of the key causes behind sale of spurious drugs in Kashmir.

Against the backdrop of this bleak situation, the absence of doctors from tertiary care hospitals is only adding to the woes of patients.

A faction of Doctors Association Kashmir (DAK) recently expressed its anguish over the trend, saying that while senior doctors of the Valley are enjoying winter holidays, their absence in tertiary care hospitals at a difficult time of the year is making the tough situation tougher for patients.

“Their holidays are compounding the miseries of patients. In fact, winter vacations of doctors have severely affected the healthcare system and patients bear the brunt”, said Dr. Nisar ul Hassan, the president of DAK faction. He added, “Winter brings more patients to hospitals and they are left uncared as doctors are holidaying”.

He wondered as to why despite huge problems faced by the people due to acute shortage of doctors in hospitals they are allowed a winter break of two months. “It is ironical that doctors are allowed to go en masse at a time when their services are needed most”.

Take for instance Sher-i-Kashmir Institute of Medical Science, the largest medical facility in the Valley that incorporates 50 departments including medicine and allied surgery and other supportive services. Out of its 162 faculty members, half go on vacation in January and the rest in February.

At Srinagar’s Government Medical College and associated hospitals, the faculty strength of 234 suddenly falls to half during winter. “We fail to understand, how a number that is already inadequate will suffice when it is reduced to half?” asked Dr. Hassan. He even held the absence of senior doctors from work responsible for increase in deaths among heart attack and stroke patients in hospitals during winter. “Some departments like CVTS, oncology, hematology, and neurosurgery are without a consultant and the emergency patients are being handled by postgraduate students who find it difficult to cope with the rush of patients and can’t deal with complicated cases,” he said.

However, some officials of the J&K health and medical education department and doctors working under it have opposed the idea terming it “sinister”. They have alleged that some people in the government want to adjust their “favourites” against senior positions. Their other apprehension is that the move would also pave the way for occupying senior positions by those junior doctors from the state who worked outside over years and that the same would be a blatant violation of rules.