The officers are part of the Navika Sagar Parikrama expedition, the 1st attempt by an all-women crew from India to sail around the globe. 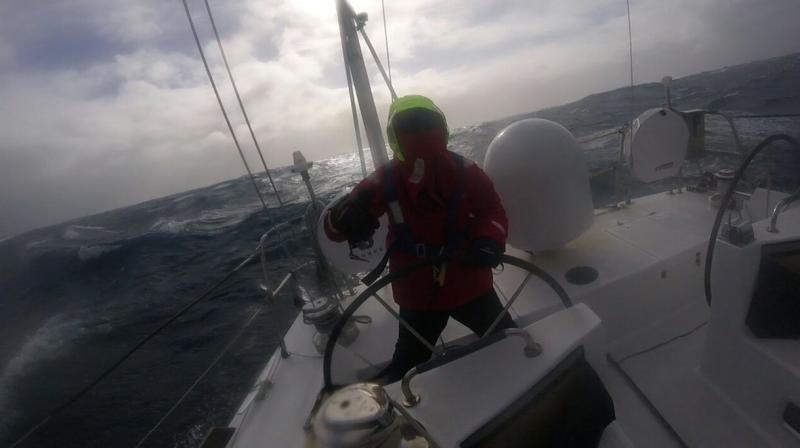 The team led by Lieutenant Commander Vartika Joshi had left India from Goa for their historic journey in September, 2017. (Photo: Twitter | @indiannavy)

Mumbai: Six women naval officers trained at the Ocean Sailing Node, were seen braving a storm in the Pacific Ocean as they made their way to the Falkland Islands, in a video shared by the Navy.

The all-women crew sailing on INSV Tarini, can be seen navigating choppy ocean waters amid a raging storm. As the vessel tipped and dipped, the crew members struggled to keep their balance. They firmly steered the 55-feet sloop and one of the officers flashed a thumbs-up sign to show that all is well.

#WATCH: 6 women naval officers on INSV Tarini, trained at Ocean Sailing Node, brave their way through a storm in the Pacific Ocean while on the way to Falkland Islands (08.01.2018) (Source: Indian Navy) pic.twitter.com/j3uAm7b8bS

According to the Navy, they showed exceptionally daring skills to navigate their way through the turbulent waters and rain.

The officers are part of the Navika Sagar Parikrama expedition, the first ever attempt by an all-women crew from India to sail around the globe.

The team led by Lieutenant Commander Vartika Joshi had left India from Goa for their historic journey in September, 2017.

The team has already made stops in Australia and New Zealand, and will next make stops at Falkland Islands and South Africa before their scheduled return in March.

The other officers are Lieutenant Commanders Pratibha Jamwal and P Swathi, and Lieutenants Payal Gupta, Vijaya Devi and Aishwarya Boddapati.

The women had told the Indian media during the flag-off ceremony that they wish to inspire other women to achieve their dreams even if it seemed impossible.

They also said they want to instil a spirit of adventure in every Indian through their epic journey.