With the BJP win, the prospects of the Opposition Congress and JD(S) coming together to topple the Yediyurappa government have faded for now. 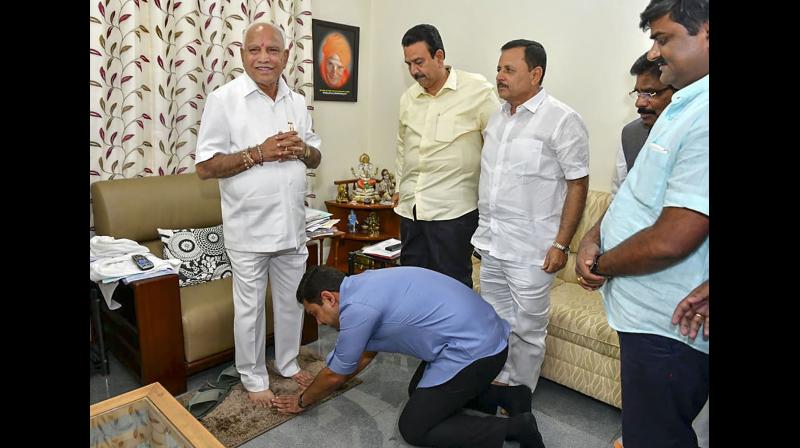 Karnataka CM B.S. Yediyurappa blesses his son B.Y. Vijayendra in Bengaluru after the BJP’s win in the Assembly bypolls on Monday. (Photo: PTI)

Bengaluru: The ruling BJP on Monday swept the Assembly bypolls to 15 seats in Karnataka, winning as many as 12 of them, ensuring a comfortable majority for chief minister B.S. Yediyurappa in the state Assembly with the BJP tally now climbing to 117 seats in the 224-member House, which still has two vacancies.

The Opposition Congress had to be content with just two seats while the JD(S) led by former PM H.D. Deve Gowda drew a blank, though it had the consolation of seeing Independent candidate in the Hosakote seat, Sharath Bachche Gowda, a BJP rebel, whom it had supported, defeat BJP candidate M.T.B. Nagaraj.

The byelections’ victory has come as a much-needed breather for the BJP, which had emerged as the single largest party after the 2018 Assembly polls, winning over 100 seats, but still had to make way for a JD(S)-Congress coalition after it fell short of a majority. After the coalition collapsed in July this year, with the rebellion by a section of Congress and JD(S) MLAs, the BJP returned to power in its southern citadel but was still short of the numbers for a clear majority in the House, which it has now secured, ensuring a hassle-free run for Mr Yediyurappa for the remaining three and a half years of his tenure.

For the party at the national level, it has come as a morale-boosting triumph after the recent setback in Maharashtra, where it had to give way to a Shiv Sena-NCP-Congress combine.

The big upsets in the bypolls were the loss suffered by BJP candidate and disqualified MLA A.H. Vishwanath in Hunsur in Mysuru and the defeat ofanother BJP candidate, M.T.B. Nagaraj, a former (Congress) minister, in the Hosakote seat.

One of the big winners was Ramesh Jarkiholi of the BJP, the mastermind of the revolt which led to the unseating of the JD(S)-Congress coalition government, in Gokak, who defeated his brother Lakhan Jarkiholi. The other big winner was Narayana Gowda, the BJP candidate for the K.R. Pete seat, considered  a bastion of the JD(S) in the Old Mysuru region. With Mr Gowda’s victory, the BJP has finally made an entry into the Vokkaliga community heartland, which was always considered its Achilles heel in a state where it is largely considered a party with a pro-Lingayat community slant.

For the Congress, the big winner was Rizwan Arshad in the minority-dominated Shivajinagar constituency in the heart of Bengaluru, who finally made it after a string of poll losses. A heartbreak for the party was the loss of former Assembly Speaker K.B. Koliwad in Ranebennur where he lost to Arun Kumar Guttur of the BJP.

The JD(S) on its part is fast losing the tag of being invincible in the Vokkaliga-dominated Old Mysuru region as it could not bag a single seat though almost half of the bypoll constituencies are in this region. Of the 15 seats which went to the bypolls, the JD(S) had won three in the 2018 Assembly polls and the Congress, 12.

All the disqualified MLAs except two — A.H. Vishwanath in Hunsur and M.T.B. Nagaraj in Hosakote — won their seats by handsome margins and are likely to be inducted into the state Cabinet soon as per a promise made by chief minister B.S. Yediyurappa during the course of the bypoll campaign.

Their victory has also proved that the electorate was hardly concerned about them jumping ship to join the BJP just a year after being elected to the Assembly in 2018 as most of the disqualified MLAs are political heavyweights in their constituencies whom the Congress and JD(S) found it difficult to beat.

With the BJP win, the prospects of the Opposition Congress and JD(S) coming together to topple the Yediyurappa government have faded for now.