Top French Navy officer says Beijing may use facility for both civilian and military purposes. 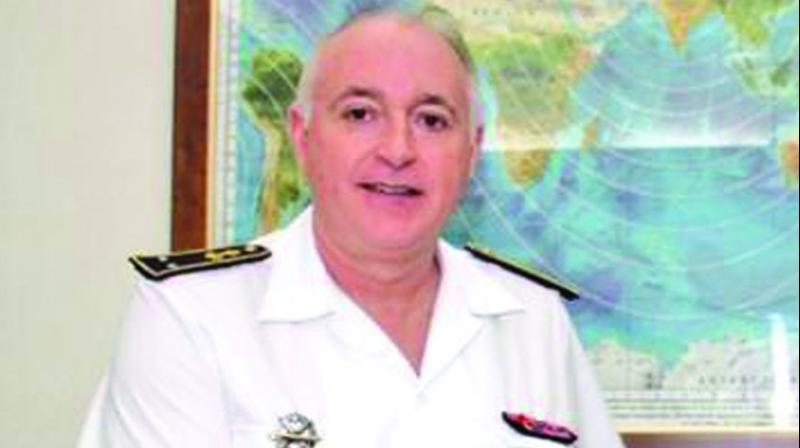 New Delhi: A senior French Naval officer has said that China could use the facilities created by it at the Hambantota port in Sri Lanka for "dual" (both civilian and military) purposes, even as he said the French Navy is expected to soon sign agreement with the Indian Navy for "exchange of classified information". This pact could in turn boost inter-operability between the French and Indian Navies, paving the way for "joint operations" too in the near-future, the officer said.

Interestingly, China has, however, been arguing that its interest in Hambantota is "purely commercial".

Speaking to reporters at the French Embassy in the capital, vice-admiral Didier Maleterre, the joint commander of the French forces deployed in the Indian Ocean, said the waters south of Sri Lanka are extremely crucial for the sea-lanes of communication from China to Europe and also to maintain the under-water Internet cables in the Indian Ocean that provide Internet connectivity to large parts of the world.

On how China could use Hambantota port in the southern part of the island nation, vice-admiral Maleterre said, "We can suspect it's dual." On China's Belt and Road Initiative (BRI) also known as One Belt One Road (OBOR), an ambitious global project of Beijing to boost global connectivity by land and sea, the senior French naval officer said, "The BRI is a Chinese strategy to protect sea-lanes of communication. They have a plan to have bays at Hambantota in Sri Lanka, Pakistan (Gwadar port in Balochistan) and Djibouti" (in Africa where both China and France have naval bases). He added, "Sri Lanka is well-placed between China and Europe." It may be recalled that India has refused to join the Chinese-led BRI.

"We (France) want the international rules-based order to be respected. We have many things in common with India. We are a democracy (like India), vice-admiral Maleterre, who is based  in Abu Dhabi (UAE) and heading the French force from there, said. "We ( France) want to conduct joint operations with the Indian Navy," vice-admiral Maleterre said, adding that France wants to conduct "joint patrols" too with the Indian Navy in the future. He also said that a pact to exchange classified information between the two navies is expected to be signed next year, perhaps as soon as January, 2020. France, though essentially a west European country, also considers itself an Indian Ocean nation as it has got island territories in the maritime region.

But, it is the senior French naval officer's remarks about Hambantota port in Sri Lanka that could well be of major strategic interest and concern to New Delhi. Just recently, new Sri Lankan President Gotabaya Rajapaksa had visited India and had assured New Delhi that no third country---seen as a thinly--veiled reference to China---would come in the way of Indo-Sri Lankan ties. It may be recalled that both global and Indian media outlets had widely reported in December, 2017, that Sri Lanka--under the then president Maithripala Sirisena---had "formally handed over the strategic southern port of Hambantota to China on a 99-year lease" and that "two Chinese firms—Hambantota International Port Group (HIPG) and Hambantota International Port Services (HIPS)—managed by China Merchants Port Holdings Company and the Sri Lanka Ports Authority would own the port and the investment zone around it".