14-year-old who had joined LeT only a week ago among dead. 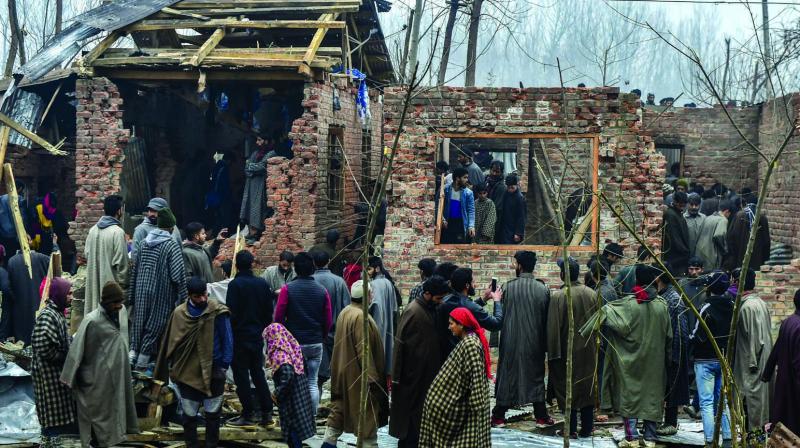 People inspect the damaged houses after an encounter between security forces and militants at Mujagund, on the outskirts of Srinagar. (Photo: PTI)

Srinagar: Three militants were gunned down by security forces in an 18-hour-long firefight in Mujagund area on the peripheries of Srinagar on Sunday.

On late Sunday evening, the police identified the slain militants as Mudassir Rashid, a 14-year-old student who had joined the militant ranks only a week ago; Saqib Bilal Sheikh; and Ali — all belonging to Lashkar-e-Tayyaba. The police also said that while Mudassir and Saqib were residents of Hajin area of J&K’s Bandipore district, their third accomplice, Ali, is believed to be a Pakistani national.

Five security personnel were injured in the fighting, which broke out during a cordon-and-search operation launched by the security forces, including the Army’s 5 Rashtriya Rifles, J&K police’s counterinsurgency Special Operations Group (SOG), and the Central Reserve Police Force (CRPF) on Saturday evening following a “credible input” about the presence of militants in the area, the police said.

The security forces fired mortars and also used explosives to blow up five residential houses as the militants kept changing their positions throughout the fighting, police sources said. Two critically injured security personnel were evacuated to the Army’s 92-Base Hospital at Badami Bagh Cantonment here, sources added. While the encounter was underway, surging crowds clashed with the security forces in the area, witnesses said. These clashes intensified following the killing of militants.

A statement issued by the J&K police here said that the security forces were fired upon by the hiding militants during the search operation in the area.

“The fire was retaliated leading to a gunfight. In the initial exchange of fire, an Army man sustained injuries and was shifted to a hospital for medical treatment. In the ensuing encounter, three militants were killed and their bodies were retrieved from the site of encounter,” the statement said.

Police sources said that later three SOG men and a CRPF jawan were also injured while fighting the militants.

The locals said that among the three slain militants is Mudasir Rashid Parray, a 14-year-old boy from Mir Mohalla in Hajin town of J&K’s Bandipora district. The identities of the other two are still being ascertained.

Parray had suddenly disappeared last week and later a photograph showing him carrying an assault rifle went viral on social media. It also confirmed his joining the militant ranks.

A report from Hajin said that hundreds of residents took to the streets chanting pro-freedom slogans as word about Parray’s death spread.

Soon, groups of youth clashed with the police and Central armed forces along the streets of the town, the report said.

The officials said that with the latest killings, the number of militants ‘neutralised’ in counterinsurgency operations so far this year has gone up to 248. 92 security personnel and 78 civilians have also lost their lives during the violence.