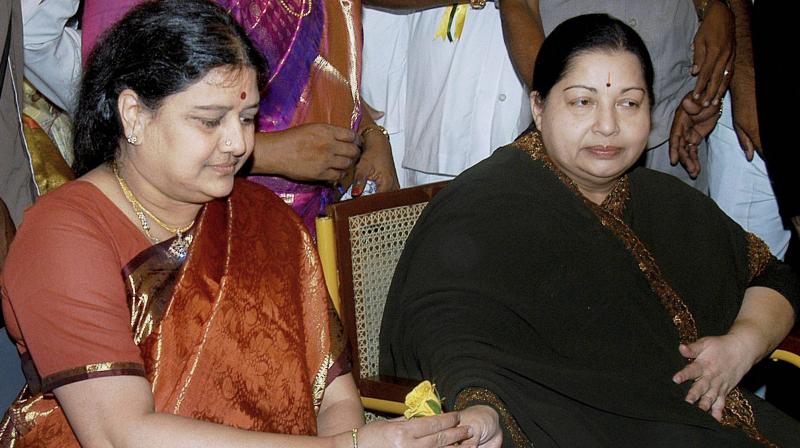 Chennai: “Senior functionaries of AIADMK urge Thirumathi Sasikala to lead the party on the path shown by Puratchi Thalaivi Amma,” the official handle of AIADMK tweeted on Saturday, confirming that the former aide of Jayalalithaa may soon become the party’s supremo.

The tweet came barely hours after newly-appointed Tamil Nadu Chief Minister O Panneerselvam chaired his first cabinet meet in Chennai. He had called on Sasikala at least thrice since Jayalalithaa's demise, leading to speculations that she was calling the shots in the party already.

Sasikala appears all set to take over the mantle of AIADMK General Secretary with senior party leaders and state ministers asserting that she alone will now be able to lead the party.

A plea urging her to step into the shoes of Jayalalithaa was made by a delegation of leaders including AIADMK presidium chairman E Madhusudanan and Lok Sabha Deputy Speaker Thambidurai when they called on Sasikala or 'Chinnamma' as she is referred to by party workers at the Poes Garden residence of the late chief minister.

"After Amma it is only Chinnamma. Chinnamma follows Amma's footsteps," said Thambidurai, whose name was doing the round for the post, adding that he told Sasikala that the party and welfare of the people was in her hands.

"We told her that we are with you," he said. "I urged her to come forward to take up responsibility of being party General Secretary and guide us," he told Jaya Plus Tamil TV channel.

"This is a people's party. It was Puratchi Thalaivi Amma who functioned understanding the people's pulse. Chinnamma follows Amma's footsteps. Hence, leaving no scope for a void, Chinnamma should immediately assume the position of party general secretary," he said, adding he was confident that she would accept the request.

He said the party is of the "unanimous" opinion that it was Sasikala who should lead the party.

Sasikala, 60, has been a close aide of Jayalalithaa for three decades and has always been seen as a power centre in the party.

Thambidurai asserted that there are no two opinions in this regard in the party. All party workers, district secretaries, MPs, MLAs and all other functionaries were one on the issue.

He said like Jayalalithaa who fought for the State's rights and people's welfare, it is "Chinnamma" who had the "strength and ability" to work for welfare of the people, the State and the party.

In what appeared to be an orchestrated campaign, a host of state ministers, including Dindigul C Srinivasan and Electricity Minister P Thangamani expressed similar sentiments in interviews to the channel.

They urged Sasikala to lead AIADMK and scotch "rumours" at this critical juncture for the party in view of the demise of Jayalalithaa.