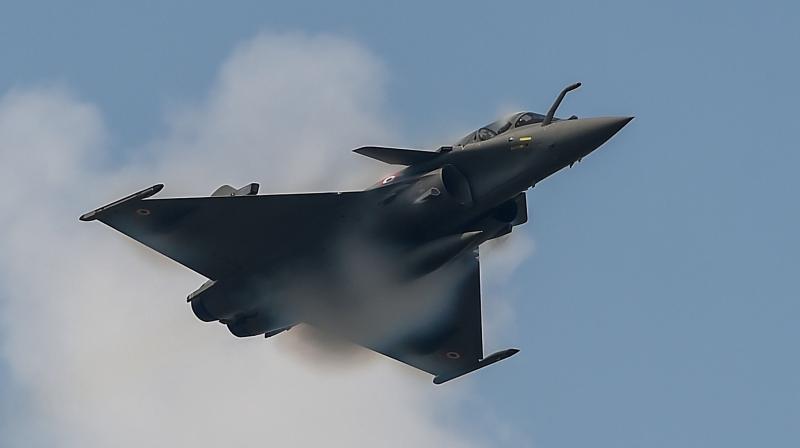 The BJP spokesperson said the alleged middleman Sushen Mohan Gupta was also accused of pocketing commission in the purchase of VVIP choppers. (PTI)

New Delhi: War of words broke out between the BJP and the Congress over the Rafale deal on Tuesday after a French media report claimed that commissions were paid between 2007 and 2012 for securing the deal with India. The ruling BJP alleged that corruption marked the deal during the Congress-led UPA government, and the Congress countered that by asking why the BJP was not ordering a Joint Parliamentary Committee (JPC) probe into the which

In fresh revelations, French investigative portal Mediapart has alleged bogus invoices were used that enabled French aircraft maker Dassault Aviation to pay at least Euro 7.5 million in secret commissions to a middleman to help it secure the Rafale deal with India. It also alleged that middleman Sushen Gupta got hold of confidential documents belonging to the Indian Negotiating Team (INT) in 2015 from the ministry of defence and a bribe was paid in lieu.

Mediapart also claimed that despite being made aware of the existence of the documents in 2018, when the National Democratic Alliance (NDA) was in power, Indian investigative agencies decided not to pursue the case.

“It involves offshore companies, dubious contracts and ‘false’ invoices. Mediapart can reveal that detectives from India’s federal police force, the Central Bureau of Investigation (CBI), and colleagues from the Enforcement Directorate (ED), which fights money laundering, have had proof since October 2018 that Dassault paid at least €7.5 million in secret commissions to middleman Sushen Gupta," it said.

The Congress on Tuesday accused the Modi government of trying to "cover-up" corruption in the Rafale fighter jet deal and demanded a JPC probe into it, asking why it did not investigate the role of a middleman despite recovering incriminating documents from him. Congress said there was a "dubious nexus" between the Modi government-CBI-ED to bury the corruption in the Rafale deal.

The ruling BJP hit back saying “corruption, influence-peddling and favouritism" marked the deal during the UPA government and demanded an answer from Congress leader Rahul Gandhi on the issue.

Congress spokesperson Pawan Khera, citing the Mediapart report, said that documents detailed the stance of Indian negotiators during the final lap of negotiation and in particular how they calculated the price of the aircraft. This gave a clear advantage to Dassault Aviation (Rafale), he claimed.

He also alleged that a note of June 24, 2014, sent to Dassault by Gupta, offering a meeting with "the political high command" was also recovered and asked if such a meeting had taken place with the "high command" in the Modi government.

Congress leader Rahul Gandhi told party leaders to not stop or be afraid of fighting against the "corrupt" Central government as the truth was with them at every step.

"When the truth is with you in every step, then what is there to worry about? My Congress colleagues - keep fighting like this against the corrupt central government. Don't stop, don't get tired, don't be afraid," Gandhi said in a tweet in Hindi, using the hashtag "#RafaleScam".

Accusing the Congress and Mr Gandhi of spreading "canard, disinformation and lies" over the Rafale issue, BJP national spokesperson Sambit Patra alleged that clearly the dissatisfaction of the Congress and the Gandhi family was the main reason behind the negotiations falling through during the UPA government.

“Corruption, influence-peddling and favouritism marked the deal during the UPA government… It will not be an exaggeration to say that the INC be renamed as 'I Need Commission,’” said the BJP leader. He claimed that corruption has become "homeless" after the BJP came to power, and its address is 10 Janpath, referring to the residence of Congress president Sonia Gandhi.

The Congress asked the government why it did not probe the entire episode, while noting that it has been demanding a Joint Parliamentary Committee (JPC) probe into the deal, to which the government has not agreed.

Replying to a question about the Congress' charge that the government has not probed the matter, Mr Patra noted that the alleged middleman was earlier arrested by the Enforcement Directorate in a corruption case and said probe agencies must be looking into the matter.

The BJP spokesperson said the alleged middleman Sushen Mohan Gupta was also accused of pocketing commission in the purchase of VVIP choppers.