'The NSG is willing to establish should there be a requirement or a threat get detected by the ministry of home affairs,' said NSG commander 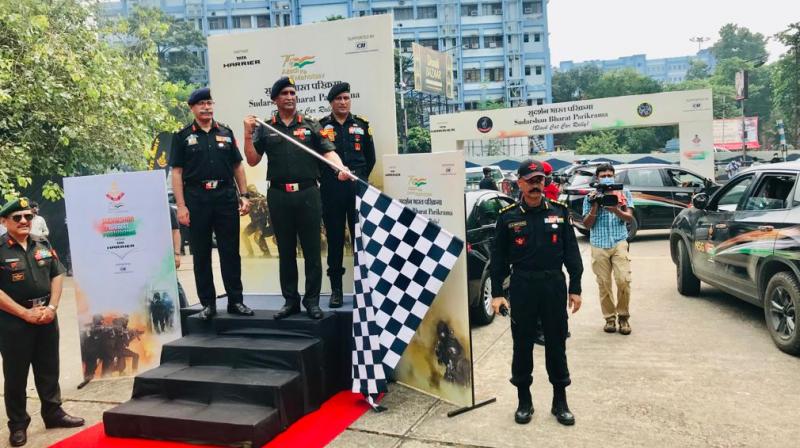 Eastern Command Chief of Staff Lieutenant General KK Repswal (in the middle) flags off Sudarshan Bharat Parikrama, a Black Cat car rally of the National Security Guard, at Victoria Memorial in Kolkata on Sunday. (By arrangement)

Kolkata: The National Security Guard (NSG), the top counter-terror force of the country, has seen a growing interest among the state police wings to undergo its training by the elite Black Cat commandos for capacity building to respond to a terror attack. This was highlighted by NSG force commander Brigadier Chaitanya Limaye on Sunday.

He was in Kolkata to attend the Sudarshan Bharat Parikrama, a Black Cat car rally comprising 49 NSG personnel, which was flagged off by Eastern Command chief of staff Lieutenant General KK Repswal from Victoria Memorial. The event was organised by special composite group 29, known as Kolkata Hub, of NSG.

The NSG deputy inspector general (training) said, "In terms of capacity building, we have a direct collaboration with the states and all the central armed police forces (CAPFs) at our main centre. As a counter-terror force, the NSG conducts their training. To build capability of each state and force, they, as first the responders, are trained to tackle a situation before the need of the NSG arises. That is our aim and vision with which we are going ahead."

He added, "We train around 5,000 personnel on an average at NSG for capacity building. We recently concluded the National Level Counter-Terrorist Exercise which was held for two weeks at our facility in Manesar with the CAPFs and state units. I must say that interests shown by the states are increasing day by day. There are a large number of requests which are coming to us for training the state units."

The NSG DIG pointed out West Bengal among the states whose police wings get trained. On the plans of more NSG special composite groups other than the five at present, he however noted, "The NSG is willing to establish should there be a requirement or a threat get detected by the ministry of home affairs." Two Bengali freedom fighters, Nepal Ranjan Ghosh and Nripendra Chandra Dutta, were felicitated by the NSG at the event.