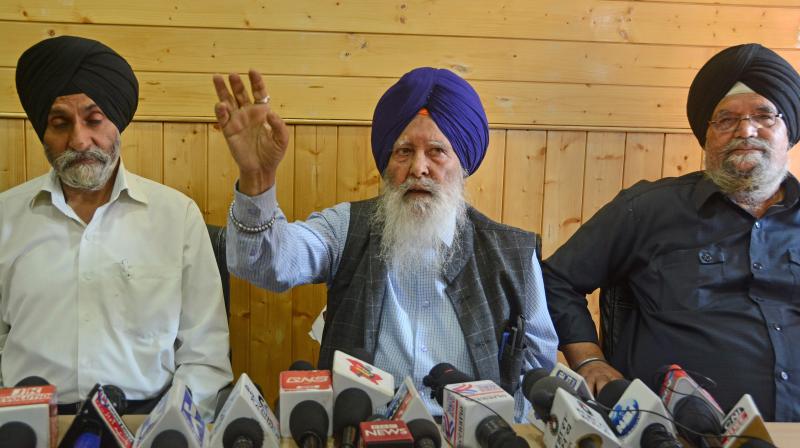 Srinagar: The Sikh employees of Jammu and Kashmir government and various Central departments and agencies in restive Valley will stay away from work from Monday over concerns about their security.

Announcing this at a press conference here on Saturday, Gurudawara Prabandak Committee (GPC) leaders said, “The government employees belonging to the Sikh community won’t attend their duties in the Valley unless and until the government assures their protection.”

The decision comes in the backdrop of the killing of Supinder Kour in the latest spate of terror attacks in the Valley. Kour, 44, who was the principal of a government-run school,  was shot dead by a group of gunmen inside the school premises in Srinagar’s Idgah Sangam area on Thursday morning. Another teacher Deepak Chand, a resident of Jammu’s Patoli area, was also shit dead.

The gory incident came days after the targetted killing of five other civilians, including a Kashmiri Pandit chemist Makhan Lal Bindroo, a street-hawker Virendra Paswan from Bihar, cab driver Muhammad Shafi and two other Muslim residents Abdul Majid Guroo and Muhammad Shafi Dar in and outside Srinagar.

He also urged the majority Muslim community to come forward and resist such incidents. “It would have been better had the majority community also participated in Friday’s protest in Srinagar (by Sikhs against the killing of Kour),” Mr Singh said.

Earlier Sardar Jagmohan Singh Raina, chairman of All Parties Sikh Coordination Committee (APSCC), had asked Sikh government employees to stay away from their duties for their safety. “They should sit at their homes till their security is ensured by the government," Mr Raina had said in a statement here on Thursday. He had also asked members of the majority Muslim community “to intervene and secure the lives of minority community members”.

Meanwhile, the Group of Concerned Citizens (GCC), a non-political civil society group comprising academicians, businessmen, advocates, scientists, former judges and civil servants of Kashmir Valley, has expressed deep anguish and shock over the recent spate of civilian killings in the Valley. It sought a time-bound judicial probe into the “barbaric murders” of seven civilians including Kour and 28-year-old Parvaiz Ahmad Gujjar, a resident of southern Anantnag district who was shot dead by the Central Reserve Police Force (CRPF) on Thursday night.

The GCC in a statement also said that it vehemently condemns the elements who are “attempting to fish in troubled waters by creating a wedge between different communities living peacefully in the Valley”. It said, “We strongly denounce the nefarious designs of certain vested interest groups to create panic through circulation of false and fabricated stories over social media thereby instigating the members of minority communities to migrate. The Group has also taken note of the fake videos which have gone viral on social media about migration of people.”

It has assured its full support to efforts, made at any level, for creating and nurturing an atmosphere of amity between different communities living in the Valley.

Earlier during the day on Saturday, All India Congress Committee in-charge for J&K and Member of Parliament Rajni Patil said that the situation prevailing in the Kashmir Valley “has exposed the fake claims of normalcy often being made by the Government of India”.

While talking to reporters after visiting the residence of slain cab driver Dar at Naid Khai in northern Bandipora district, she said that being in the Valley is making her feel that the situation of 1990 is being repeated “as innocent people are being shot here and the claims of normalcy that are being made by BJP government here are proving hollow.”

She also demanded a judicial inquiry into the civilian killings, saying, “The victims’ family members also demanded that the killers need to be identified as soon as possible”. She asked, “How long will we call them unidentified gunmen? We have known them and if we can't do that, we're going to make a big mistake.” She asked for enhancing security on ground in the Valley rather “than just making the claims that everything is normal.”