Come elections, the ‘proud owners’ of firearms stand in long queues before local police stations to deposit their licensed weapons. 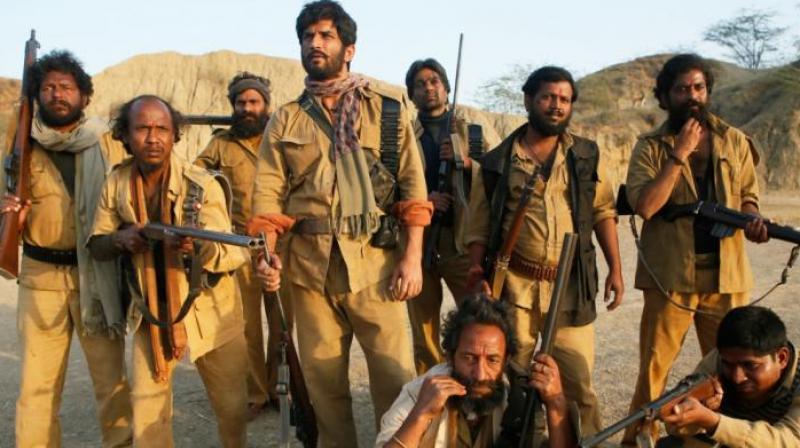 Sonchiriya, a film on a gang of dacoits from Chambal. (Representational image)

Bhopal: Bandits no longer rule Madhya Pradesh’s badland of Chambal. But the legacy of gun culture left behind by them continues to thrive in the region.

The growing firearm enthusiasts in the region are a testimony to it.

Come elections, the ‘proud owners’ of firearms, in varying sizes and designs, stand in long queues before local police stations to deposit their licensed weapons.

This is a common sight in the seven districts of the Gwalior-Chambal region during the poll time.

Of the 28 Assembly constituencies going to by-elections in MP on November 3, 16 fall in Gwalior-Chambal region.

A staggering 1.04 lakh firearms, including 12 bore guns, 315 bore rifles, revolvers and pistols, have so far been deposited in Gwalior-Chambal region in the state ahead of November 3 by-elections in 28 A ssembly constituencies in MP.

“Another one lakh weapons are to be deposited in the police stations in the area in coming days,” a senior police officer posted in the region told this newspaper on Friday.

“Guns have become social status in the region. The culture traces back to Mughal era. But, the yesteryear’s bandits of Chambal have romanticized the gun culture in the region,” the police officer said.

“The gun culture runs in the veins of the region”, Gwalior district superintendent of police Amit Sanghi said.

The weapons are deposited in the local police stations till the completion of the whole election process.

“People become emotional while depositing their weapons, their most loved possession, with the local police stations,” Giriraj Rajoria, a social activist of Morena district told this newspaper.

“The guns have become an inseparable part of the culture of people in the region. Hardly, a festival in the region is celebrated without celebratory firing,” he added.