Hence, the delay or wait for 40 years to worship cannot be considered as exclusionary and it is an error of law on the face of the judgment. 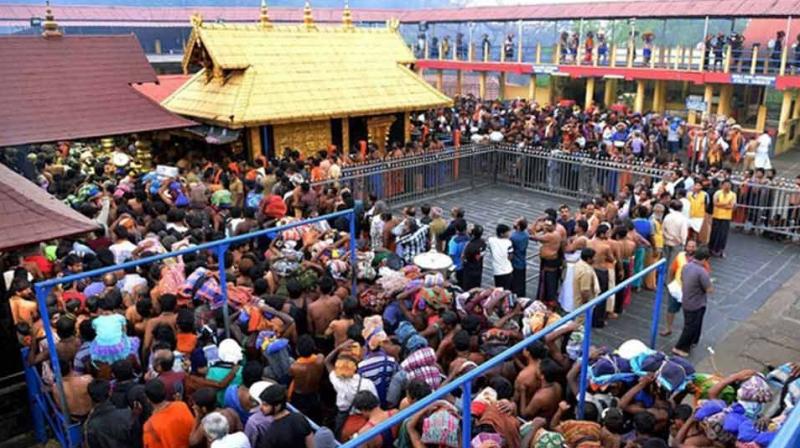 New Delhi: The Supreme Court on Tuesday turned down a plea for urgent listing of review petitions filed against the September 28 verdict allowing entry of all women into Sabarimala Ayyappa temple.

Advocate Mathews Nedumpara, appearing for one of the petitioners Shailaja submitted before a three-judge bench of Chief Justice Ranjan Gogoi and Justices Sanjay Kishan Kaul and K.M. Joseph that the temple was due to re-open for devotees from October 16 and, hence, pleaded for interim injunction on the operation of the order. The CJI told the counsel “we have heard you. The matter will be listed in due course”.

Four review petitions have been filed so far by the Nair Service Society, the president of the National Ayyappa Devotees Association, People for Dharma and NGO, Chetana Conscience of Women.

The review petition filed by Shylaja Vijayan submitted that the Supreme Court’s verdict in the Sabarimala case has “sent shock waves among millions of Ayyappa devotees”. The NSS said that restriction based on age of a female is not a restriction, which amounts to discrimination on the ground of ‘only’ of sex.

The NSS said that an exclusionary practice may fall foul of the Constitution but the impugned practice is not exclusionary inasmuch as these females are not excluded from worship.

As the deity is a Naishtika Brahmachari, females before the age of 10 and after the age of 50 years are eligible to worship Him and there is no practice of excluding worship by females.

Hence, the delay or wait for 40 years to worship cannot be considered as exclusionary and it is an error of law on the face of the judgment. There is no discussion in the majority judgments as to whether religious beliefs can be tested on the touchstone of rationality. The dissenting judgment adverts to this aspect.

It said that a regulatory provision based on essential religious practice is a matter of faith prevalent for centuries and has a reasonable relation to the object sought to be achieved viz., preserving the character and identity of Lord Ayyapa as Naishtika Brahmachari in Sabarimala temple alone.

Shylaja Vijayan contended that the verdict violated the fundamental rights of millions of people, the devotees of Lord Ayyappa. The petitioner also pointed out as to how the Jallikattu verdict was overturned through a legislation following widespread protests from people and similar protests are taking place after Sabarimala verdict.

This is a faith and faith cannot be judged by scientific or rationale reasons or logic.  The educated devotees of Kerala; so too rest of the world understood it as no kind of discrimination; the women devotees are allowed to enter thousands of other temples in Kerala, so too in the width and breadth of the country, and worship Lord Ayyappa, the petitioner said.