Highly placed sources said Parrikar is likely to distribute additional portfolios to his Cabinet ministers during this week. 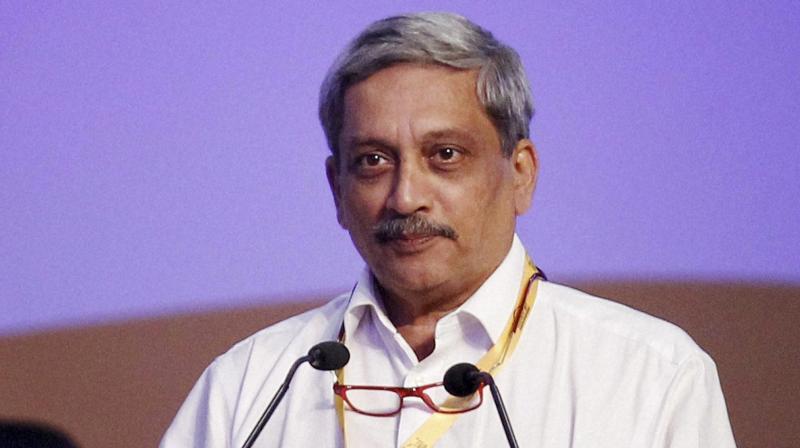 Parrikar, 62, is admitted at the All India Institute of Medical Sciences (AIIMS) in Delhi since September 15 for a pancreatic ailment. (Photo: File | PTI)

Panaji: Goa Chief Minister Manohar Parrikar will meet the alliance partners of his government on October 12 at the AIIMS in Delhi where he is currently undergoing treatment, an official said Wednesday.

Parrikar, 62, is admitted at the All India Institute of Medical Sciences (AIIMS) in Delhi since September 15 for a pancreatic ailment.

"The alliance partners have been called for a meeting by the CM in Delhi on October 12 at AIIMS where he is admitted," a senior official in the Chief Minister's Office (CMO) here told PTI.

During the meeting, Parrikar would discuss "matters related to the state's governance," he said.

"I have been invited for the meeting with the chief minister in Delhi on October 12. I don't know who else is invited," Gawade said, adding that he has not been informed about the meeting's agenda.

This would be the first formal meeting chaired by Parrikar since his admission to the AIIMS last month.

Highly placed sources said Parrikar is likely to distribute additional portfolios to his Cabinet ministers during this week.

"A discussion is likely in the meeting about portfolios to be distributed to the allies," a source said.

BJP president Amit Shah had last month said Parrikar would continue as the chief minister and that there would be reshuffle of his Cabinet soon.

Later, two ailing ministers Francis D'Souza and Pandurang Madkaikar were dropped from the Goa Cabinet and they were replaced with Milind Naik and Nilesh Cabral.

Questions over the stability of the government have been raised by the Opposition Congress because of Parrikar's illness.

Goa Deputy Speaker and BJP MLA Michael Lobo said last Friday that the state administration has "totally collapsed" because of the absence of Parrikar and people were praying for his early recovery.

The MGP, a key ally in Goa's ruling BJP-led coalition, last Wednesday dismissed questions over the stability of Parrikar government but expressed readiness to face mid-term polls in case the Assembly is dissolved.

The BJP, which has 14 MLAs in the 40-member Assembly, is ruling the state with the help of the MGP, the GFP, the Nationalist Congress Party (NCP) and three Independents. GFP and MGP have three seats each and NCP has one.