The explosion had taken place in the gas pipeline connected to the coke oven section of the plant during a maintenance job, SAIL had said. 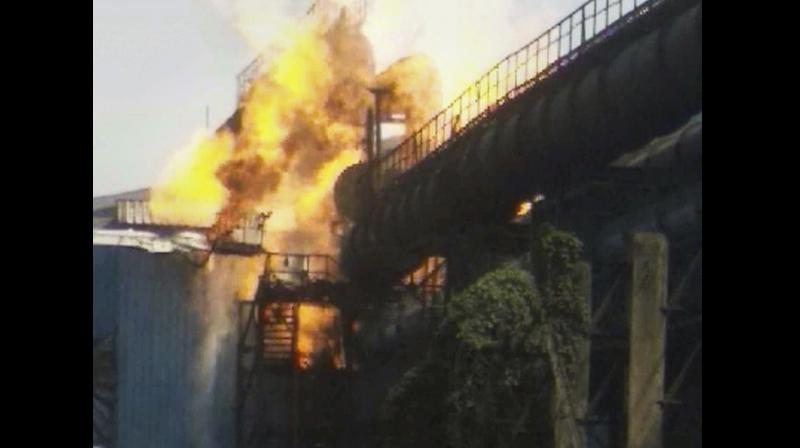 Of the 14 injured people admitted to the burns unit of the Jawahar Lal Nehru Hospital in Bhilai, two succumbed Tuesday late night. A few other injured people were also in a critical condition. (Photo: PTI)

Raipur: Two employees, who were critically injured in an explosion at the Bhilai Steel Plant (BSP) in Chhattisgarh, succumbed to injuries at a hospital, taking the death toll in the blast to 11, an official said on Wednesday.

On Tuesday, nine people had died and 14 others were injured in the gas pipeline blast at the plant of the state-owned Steel Authority of India Limited (SAIL) in Durg district, located around 30 km away from here.

Of the 14 injured people admitted to the burns unit of the Jawahar Lal Nehru Hospital in Bhilai, two succumbed Tuesday late night, a public relations officer of the Bhilai Steel Plant told PTI.

"The two had received over 80 per cent burns," he said, adding that a few other injured people were also in a critical condition.

The explosion had taken place in the gas pipeline connected to the coke oven section of the plant during a maintenance job, the SAIL had said.

Of the nine people who died on Tuesday, six worked in the plant's energy management department, while three were employees of its fire brigade unit, the official said.

Union Steel Minister Chaudhary Birender Singh and Chhattisgarh Chief Minister Raman Singh are scheduled to visit the hospital in Bhilai to see the injured people admitted there, an official said. They will also take stock of the incident from the plant management and the Durg district administration.

Inspector General of Police (Durg Range) G P Singh had said earlier that after receiving the postmortem report of the deceased, a case under the Indian Penal Code Section 304 (A) (causing death by negligence) will be registered followed by an inquiry into the incident.

Union Minister of State for Steel Vishnudeo Sai had said Tuesday that a four-member high-level committee was constituted by SAIL to probe the incident.

Adequate compensation will be given to families of the deceased, Sai had said, adding that the injured were being provided the best possible medical treatment.

In June 2014, six persons, including two deputy general managers, were killed and many others affected when a poisonous gas leaked in the plant, he said.