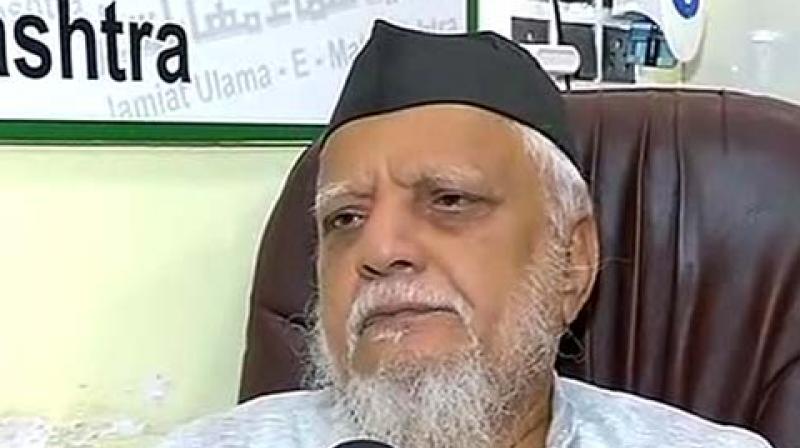 Azmi even warned the government regarding the consequences if they forcefully implement the decision to allow Muslim women aged above 45 years to go on Haj. (Photo: ANI | Twitter)

Mumbai: In a bizarre statement, Gulzar Azmi, the Secretary of Jamiat Ulama, on Tuesday said that if everyone wants equality on the basis of gender, then why men and women don't carry pregnancy for four and half months each.

This statement from the cleric came days after Union Minority Affairs Minister Mukhtar Abbas Naqvi proposed a Haj Policy that will allow women above 45 to travel in a group of at least four, without a male member.

"The decision to allow Muslim women aged above 45 years to go on Haj alone is entirely illegal and is an intervention in Islam. It is clearly stated in Quran that a woman cannot go on Haj alone," the Jamiat Secretary said.

"From the time this government has come to power, they tend to touch upon such issues that make Muslims anxious which makes the people of our religion believe that this government is against Muslims. The promises that were made by Prime Minister Narendra Modi have not been fulfilled yet, so to divert the attention they raise issues against Muslims," Azmi said.

Questioning the issue of gender equality, Azmi said, "If we talk about equality then there should be equality even in carrying a child in womb. Then a man should carry the baby for four and half months and the women for rest of the half time. Then only one can say that there is equality. First there should be equality in the birth process then other aspects of equality should be implemented in Islam."

Azmi even warned the government regarding the consequences if they forcefully implement the decision to allow Muslim women aged above 45 years to go on Haj.

"Muslim clerics across the country have announced that the decision is illegal and we will never accept it. If the government forces us to accept this decision, then Muslims will have to hit the streets to protest against the government," he said.

Union government's proposed Haj Policy drafted by a committee appointed by the Centre highlights the abolishment subsidies of Haj pilgrims and allowing women above 45 to travel in a group of at least four without a male member.