Currently, the IAF has 33 fighter squadrons against the authorised strength of 42 squadrons. 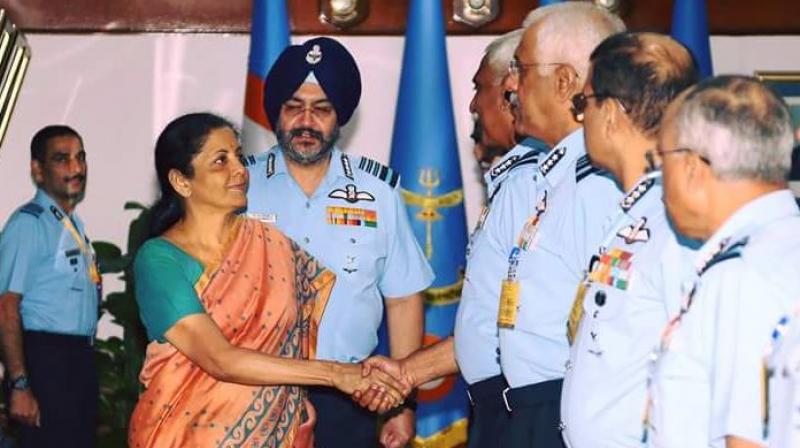 New Delhi: Lack of timely decision making in the last decade resulted in gaps in the Indian Air Force and the government is committed to fill them, Defence Minister Nirmala Sitharaman said, on Tuesday.

In an address at the bi-annual conference of IAF commanders, the defence minister Sitharaman also said that the budgetary allocations should not be viewed as a constraint and should be looked at to acquire what is "absolutely necessary," the IAF said.

Inaugurating the three-day conference, she also said that the powers given to the service chiefs should be "fully utilised" in achieving required capabilities of the forces.

"She said that the government is committed to fill the gaps which have arisen due to lack of timely decision making in the last decade," the IAF said in a statement.

Currently, the IAF has 33 fighter squadrons against the authorised strength of 42 squadrons. The IAF has been pressing the government to expedite acquisition of combat jets to overcome the shortage.

The IAF is likely to start the process later month to acquire a fleet of single engine fighter jets which are expected to significantly enhance its overall strike capability. It is also looking at procuring various other platforms and weapons systems.

The IAF commanders conference is taking place amid an evolving regional security scenario and growing assertiveness by China in some parts of the Sino-India border.

Last week, Chief of Air Staff Air Chief Marshal B S Dhanoa had said the IAF is capable of effectively countering any threat from China and Pakistan simultaneously in a two-front war.

Sitharaman said the IAF along with the Defence Research and Development Organisation (DRDO) and the Ordnance Factory Board, a state-run defence equipment maker, should make an assessment about the possible areas of indigenisation under the 'Make-in-India' programme.

In his address, Air Chief Marshal Dhanoa emphasised the need for continuous effort and training to maintain IAF's air power, and called for continuing the process to enhance capability of the force.

He also reiterated the IAF's role as the first responder in most contingencies and thus the need to sustain the ongoing process of capability enhancement making use of the government's thrust on the 'Make-in-India' initiative.

The IAF said the conference will deliberate on a raft of issues which will decide the future trajectory of the force.  It said deliberations will take place on operations and maintenance issues.

Various administrative initiatives were also expected to be taken at the conclave to enhance the working environment of the IAF.

In sync with the government's digital India initiative, two mobile applications for Air Force Cellular Network (AFCEL) phones will also be released during the conference, the IAF said.

A book titled 'Aero India- Ascent through the ages' was also scheduled to be released during the conference.