Moreover, the bursting of the firecrackers will be prohibited between 10 pm to 6 am. 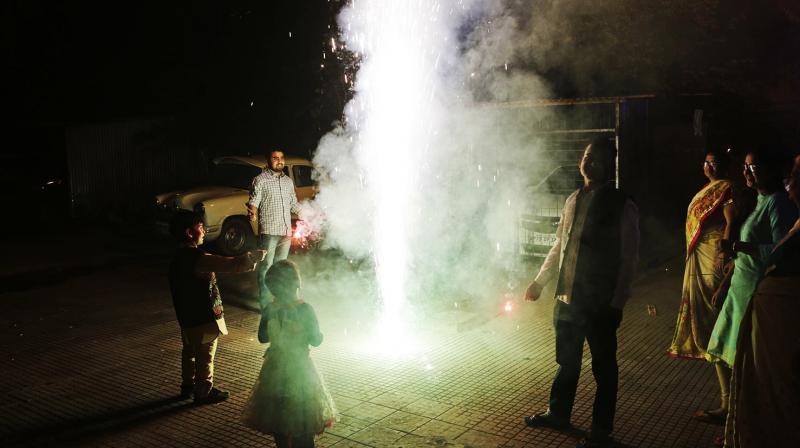 A special public awareness campaign will be undertaken seeking support of people to prevent air and sound pollution during the ensuing festival. (Representational Image | AP)

Raipur: The Chhattisgarh government has imposed a ban on the use of firecrackers with high decibels and those highly contributing to air pollution during Diwali, a senior official said on Tuesday.

Besides, a special public awareness campaign will be undertaken seeking support of people to prevent air and sound pollution during the ensuing festival, he said.

Chhattisgarh Environment Conservation Board (CECB) Chairman Aman Kumar Singh in a circular to all division commissioners, collectors and superintendents of police has asked them to take effective steps to ensure restriction on sale and use of high decibel firecrackers in their respective areas.

Moreover, as per the circular, the bursting of the firecrackers will be prohibited between 10 pm to 6 am.

A distance of at least 100 metres should be maintained from hospitals, educational institutes, religious places while bursting crackers, the official said.

Officials have also been asked to undertake public awareness campaign to apprise people with the ill effects of crackers besides informing them about air and noise pollution.

School students should be associated with the campaign, Singh said.

Moreover, instructions have also been given to division commissioners and collector to prevent burning of straw in paddy fields after harvesting in the ongoing kharif crop season to check air pollution, he added.

On Monday, the Supreme Court had banned the sale of firecrackers in Delhi-NCR till November 1.