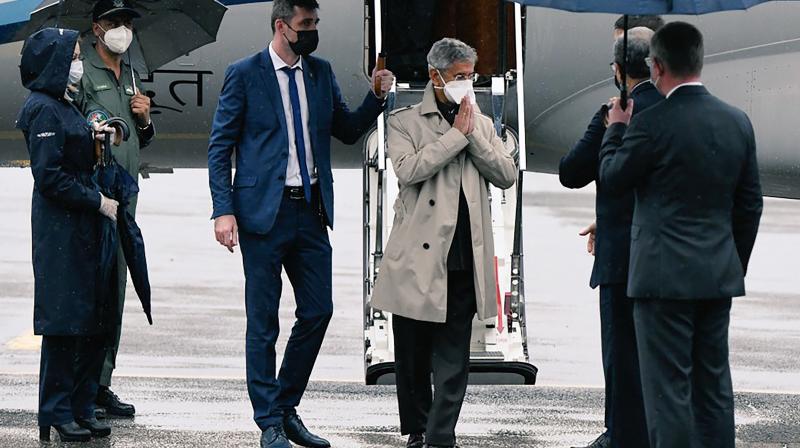 External Affairs Minister Subrahmanyam Jaishankar is greeted by the ambassador and senior officers from Russian Foreign Ministry, on his arrival in Moscow. — PTI photo

At a bilateral meeting on Thursday on the sidelines of the Shanghai Cooperation Organisation (SCO) foreign ministers meeting in Moscow, External Affairs Minister S. Jaishankar is expected to clearly tell his Chinese counterpart Wang Yi that peace on the borders is closely linked to development of bilateral ties between the two Asian giants and that China must de-escalate by dis-engaging its troops to restore the April status quo in the Ladakh sector.

This comes even as news agency reports from Beijing cited the Chinese Foreign Ministry as saying there would be a Russia-India-China (RIC) trilateral foreign ministers’ luncheon meeting in the Russian Capital on Thursday which is being seen by observers as an effort by a worried Russia to encourage and persuade both Asian neighbours to reach a compromise and avoid a devastating war in the Ladakh sector.

The RIC is an already-existing trilateral format and the luncheon meeting will obviously be hosted by Russian Foreign Minister Sergey Lavrov which will give the Indian and Chinese foreign ministers another opportunity to interact apart from their own bilateral meeting.

EAM Jaishankar had made it clear last week that “what happens at the border will impact the (Sino-Indian) relationship”. Blaming China for the situation of the last four months in the Ladakh sector that was a “direct result” of the Chinese side trying to unilaterally change the status quo at the Line of Actual Control (LAC), India had also last week clearly said the “way ahead” was “negotiations” through both military and diplomatic channels. New Delhi added it is “firmly committed” to “peaceful dialogue” and called on China to “sincerely engage” India in order to restore peace and tranquillity at the LAC. New Delhi also made it clear that Beijing “should not take any provocative action or escalate matters”, which comes after the latest round of Chinese military provocations at Pangong Tso lake in Ladakh both on the night of August 29 and on August 31.

The EAM meanwhile began his bilateral meetings on Wednesday in the Russian Capital by holding talks with his Kyrgyz and later Tajik counterparts. The SCO is an eight-member predominantly Central Asian Grouping that comprises China, Russia, Kazakhstan, Kyrgyzstan, Tajikistan, Uzbekistan, India and Pakistan. Both India and Pakistan became SCO members in 2017.

EAM Jaishankar tweeted, “A fruitful meeting with FM Chingiz Aidarbekov of Kyrgyz Republic on SCO sidelines. Thanked him for the support in facilitating return of Indian nationals. Discussed issues of bilateral and regional interest. Agreed to further enhance our Strategic Partnership in all spheres.” He added, “A warm meeting with Tajik FM Sirojiddin Muhriddin. Pleased with our growing bilateral and regional cooperation. Highly value this strategic partnership.”