The Union ministry stated that such symptomatic negative cases could remain RT-PCT untested and spread the disease among their contacts. 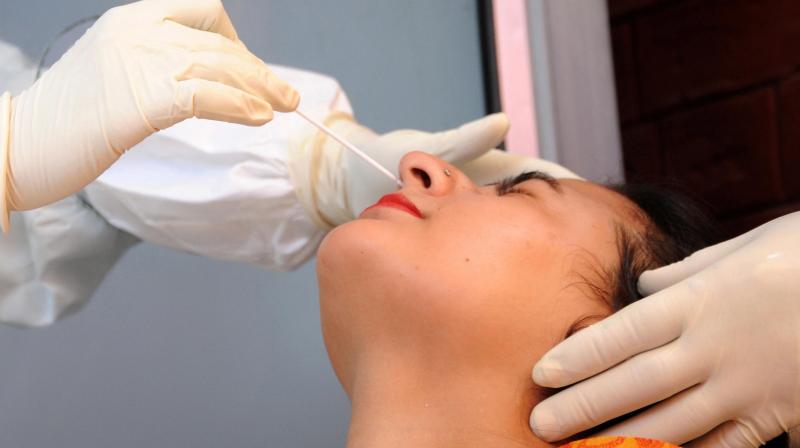 A medic collects a swab sample of a woman for COVID-19 test at Civil Hospital, in Amritsar, Wednesday. (PTI)

The Ministry of Health and Family Welfare on Thursday urged states and Union Territories to mandatorily retest all symptomatic negative cases of rapid antigen tests through RT-PCR. It also asked the states/UTs to ensure that no positive cases are missed to curb the spread of infection.

The ministry claimed that "in some large states, symptomatic negative cases tested by Rapid Antigen Tests (RAT) are not being followed up by RT-PCT testing."

The ICMR had previously declared that RATs are not fully reliable and there was plenty of scope for them giving false negative results. It had also said, way back in June, that those testing negative in a RAT, should be tested by RT-PCR to rule out infection.

The Union ministry stated that such symptomatic negative cases could remain RT-PCT untested and spread the disease among their contacts.

Notably, the ministry in its letter to the states and Union Territories stated that RAT is being used to increase access and availability of testing in the field, while RT-PCR remains the gold standard of COVID-19 tests.

The ministry also urged the states to urgently establish a monitoring mechanism in every district with a designated officer or a team, and at the state level too, for following up on such cases. These teams, the health ministry said, "shall analyse details of RAT conducted on a daily basis in the districts and in the state and ensure that there are no delays in restesting of all symptomatic negative cases."