India   All India  10 Sep 2019  Sweepers stop work due to no salary in Bengal, BJP MP Arjun Singh picks up broom
India, All India

Sweepers stop work due to no salary in Bengal, BJP MP Arjun Singh picks up broom 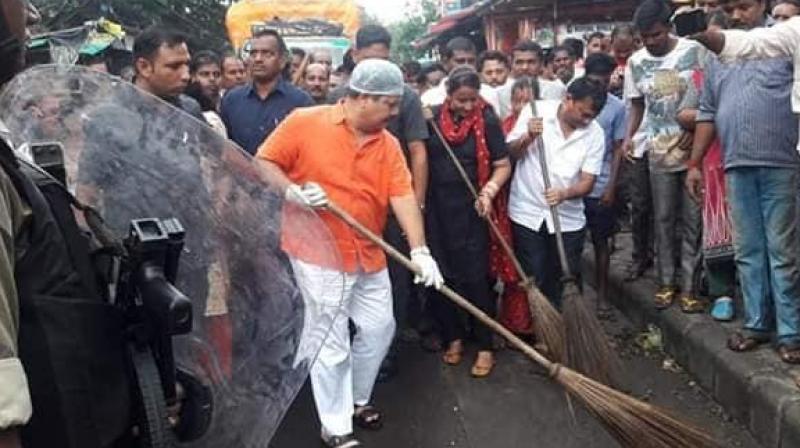 On Monday, Singh and his followers undertook a cleaning drive, as heaps of garbage along roadsides were growing bigger with each passing day. (Photo: Twitter)

Kolkata: Bharatiya Janata Party’s Barrackpore MP Arjun Singh took up a shovel and a broom on Monday to clear a roadside drain after Bhatpara municipality’s cleaning workers were on strike work due to non-payment of salary for last five months.

With Singh switching camps, Bhatpara municipality also went to BJP, becoming the first civic body in the state to be controlled by BJP in June.

On Monday, Singh and his followers undertook a cleaning drive, as heaps of garbage along roadsides were growing bigger with each passing day, reported Hindustan Times.

Singh said: “Our cleaning drive is inspired by Prime Minister Narendra Modi’s Swachh Bharat Abhiyan. We want to keep Bhatpara clean. Since the cleaning workers are not getting their payment due to the state government’s apathetic attitude towards Bhatpara, we decided to clean the drains.”

He said cleaning drains has become an emergency due to the outbreak of dengue in many areas.

According to Somnath Talukdar, vice-chairman of Bhatpara municipality, the civic body’s dues to about 4,000 casual cleaning workers stood at Rs 2.89 crore.

Talukdar said that the state government released funds for 27 civic bodies on September 4 but nothing went to Bhatpara municipality and called it ‘vendetta politics’. TMC, however, refuted the charges.

Bhatpara has remained in the eye of a political storm in Bengal since Singh joined the saffron camp. Bhatpara and the adjoining areas have witnessed clashes between the TMC and BJP supporters since 2019 general elections.