Fadnavis govt had made an application to ministry for exclusion and had already handed over 33 hectares of Aarey land for the car depot. 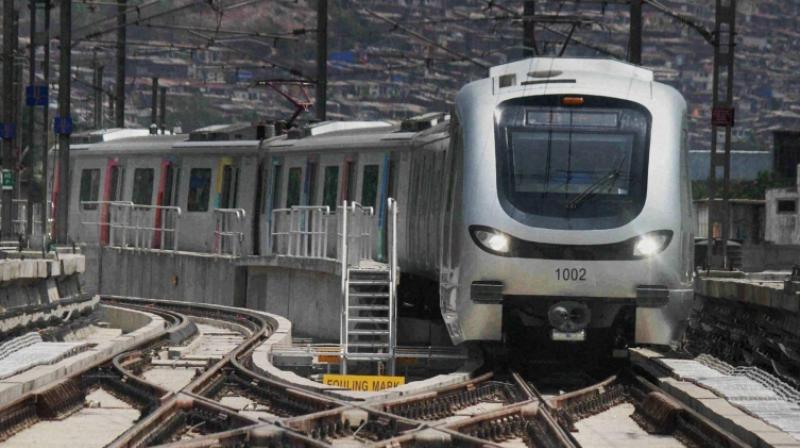 'We have decided to take up 28,000 sqft of land in the Wadala area to build the casting yard for the metro line 6,' an MMRDA official said. (Photo: PTI)

Mumbai: Amidst mounting public protests against its demand for more forest lands from the Aarey Colony greens to build another casting yard for the upcoming metro projects, MMRDA has decided to seek an alternate land parcel at Wadala in the southeastern periphery of the megapolis.

Since the past two weeks there have been daily protests by citizens and the greens in many parts of the city against the state's reported move to fell around 2,900 more trees in the city's green lung Aarey Colony, which is home to thousands of tribals and hundreds of wildlife species, apart from the unique flora and fauna, to build a casting yard for the 14.47-km Lokhandwala-Kanjurmarg corridor-6.

"We have decided to take up 28,000 sqft of land in the Wadala area to build the casting yard for the metro line 6," an MMRDA official told PTI Monday. "No land is being sought from the Aarey Milk Colony," the official clarified.

Last week media reports had said despite public protests, the state had given the go-ahead to MMRDA to eat up yet another portion of Aarey to build a casting yard, which would have led to the felling of close to 2,900 more trees as it was seeking an additional 2,775 sqmt land.

Following this, the public increased their opposition to the move. Already, the government has allowed the Metro Bhawan (launched by Prime Minister Narendra Modi last Saturday), the metro car shed and also a casting yard deep within the 3,166-acre Aarey Colony, which is contiguous to the Sanjay Gandhi National Park, the largest green lung of the megapolis.

That apart many commercials, including the famed Film City, and educational institutions have already encroached the green cover.

Amidst the rising public anger, chief minister Devendra Fadnavis had last Friday defended the move to hand over more forest land from Aarey saying there is a need to balance development and environmental concerns.

Having fallen behind New Delhi and Kolkata and also many other smaller cities by many decades, the megapolis is witnessing an unprecedented metro development with MMRDA, building 14 metro lines extending upto 337 km across the megapolis at an investment of over Rs 1.25 lakh crore over the next decade.

The MMRDA has been facing flak from the greens, the locals and celebrities like Shraddha Kapoor who came forward to join the "Save Aarey" movement when it had proposed acquiring a part of the land for building a car shed for metro 3 and setting up the Metro Bhavan on 20,387 sqmt plot.

"MMRDA's demands are never-ending. We had opposed the car shed in the colony, which would result in felling thousands of trees. But the authorities didn't stop at that, they decided to set up the Metro Bhavan. We are not fighting the metro but our fight is to protect the forests and the green area of the city," environmentalist with the city-based NGO Vanashakti Stalin D told PTI.

Vanashakti had filed a petition with the National Green Tribunal demanding that Aarey Colony be declared a 'no development zone.' The Union environment and forest ministry in a notification, however, excluded part of Aarey from declaring it as eco-sensitive zone, paving the way for the metro car depot for the upcoming Colaba-Bandra-Seepz metro line.

The Fadnavis government had also made an application to the ministry for the exclusion and had already handed over 33 hectares of Aarey land for the car depot.

"Even if we consider the carshed, what was the need for the Metro Bhavan? Could that not have been constructed in BKC, where MMRDA has large land parcels?" Stalin questioned.

Nearly 30 percent of the 3,166-acre Aarey Colony has been already leased out to various government bodies like veterinary college, police training and housing, the Film City, for animal husbandry and social forestry, among others.

According to Naturalist Shardul Bajikar, the plots that the government is seeking for the project has exotic trees and wildlife, which if cut will lead to major environmental imbalance.

"Aarey is an active buffer for the protected areas of the SG National Park. This landscape is a veritable green lung and must be protected as it is," he added.