A veteran in the world of dance, she has been dancing since 1977 and has dedicated herself to the pursuit of the Indian classical dance Odissi. 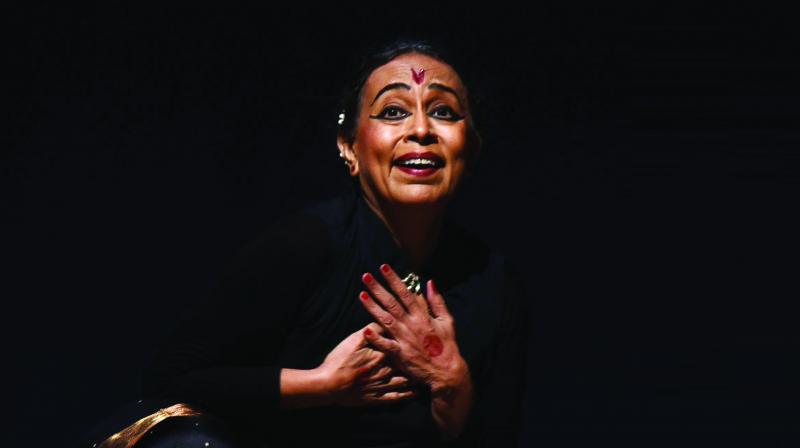 Jhelum tai, as she is popularly addressed by all her students and friends, recently put up a mesmerising performance inspired by a Marathi book called Mahadwar by Aruna Dhere, which is the fictionalised life story of Chokha Mela. She left her audience totally spellbound and the result was simply divine.

Dance has been a way of life for her since childhood — for a number of years she performed in the dance ballet staged by the Rashtra Seva Dal Kalapathak under the direction of noted poet Vasant Bapat and the tutelage of Ramesh Purav. Together they presented several memorable shows such as Maharashtra Darshan, Bharat Darshan, Shiv Darshan and Azadi Ki Jung — which can be cited as particularly noteworthy productions. I am talking about the truly captivating dance Guru Jhelum Paranjape.

Jhelum tai, as she is popularly addressed by all her students and friends, recently put up a mesmerising performance inspired by a Marathi book called Mahadwar by Aruna Dhere, which is a fictionalised life story of Chokha Mela. She left her audience totally spellbound and the result was simply divine.

Jhelumji is a name to reckon with — a veteran in the world of dance, she has been dancing since 1977 and has dedicated herself to the pursuit of the Indian classical dance Odissi. She began her training with Guru Shankar Behera, and had — since 1980 until his death in 2004 — been training with the doyen of Odissi dance, Padmavibhushan Guru Kelucharan Mohapatra. She has been actively performing since 1983. When she began my training in Odissi with Shankar Behera, Smita Patil was her active partner, though Smita Patil moved her focus to cinema but her heart was always into dance. The award-winning actress was Jhelumji’s dear friend and mentor. It was through Smita Patil that she was introduced to Guru Kelucharan Mohapatra. The bond and admiration between Jhelum Paranjape and Smita Patil was so strong that after Smita Patil’s death in 1986, Jhelumji wanted to give her dear friend’s inherent memory a concrete from and that is how her dance institute Smitalay came into being.

Totally captivated by her recent performance on Chokha Mela, I sat down with the down to earth and full of life danseuse Jhelum tai and she spoke her heart out:

Why did you choose the unique topic of the Chokha Mela for your performance?

I read the fictionalised life story of Chokha Mela in Aruna Dhere’s Marathi book Mahadwar — I was extremely touched and impressed — it stirred something inside me. What is this love that Chokha felt for Vitthal (God), why did he feel this love, when he was denied to even have a peek at his lord, even when he was mercilessly beaten up he cared two hoots and sang the glorious abhangas (songs) for Vitthal. Chokha truly and completely believed in Vitthal — their relationship was not something that I could understand, but maybe it was something that I could interpret, and that is what I have tried, and succeeded.

So like Chokha, do you also believe in God and his powers?

I am an atheist, no prayer, no going to temples, no pictures of Gods at my home. My family, my parents and grandparents were like that too. They did not believe in God, in religion, in caste, but they believed in humanity, in universal love, in the sincerity and dedication of one’s work. I believe it was because of my upbringing, my belief in humanity and sincerity and dedication to what one does that this performance turned out the way that it did.

What all did you do to prepare for this performance?

Firstly, I read that book two to three times to figure out what is it that I exactly wanted to do. Then I kind of made a storyline in my mind, and of course, on paper. I thought of using his abhangas to make the storyline full, whole, fulsome and wholesome or whatever one can call it. I only knew two of his abhangas which were sung by many famous vocalists and were very popular. So, I read up on more of his abhangas. Selected a few, then decided how and where each would fit in the storyline, and then finally sat with the music composer. Manoj Desai, who has composed the music, is a very religious and spiritual person. He was very happy to do this project with me. While the music was being done, the choreography was simultaneously going on in my mind. But the actual final choreography happened only after the music was fully complete.

Tell us about a memorable incident during the making of Choka Mela.

I remember that for one abhang which was already set to music and was very popular was set to eight beats. I wanted this in seven beats. Initially, Manoj said that it was impossible — it was meant for eight beats only, but then when I sang it for him in seven, using the same tune of course, he was surprised and convinced, so the music was done.

You have done so many various types of performances. Why is this performance close to your heart?

For me, this is like a message to everyone, to all the people in our society who believe in and follow religious and caste discrimination, that, “Hey guys, there’s nothing like this, there should be nothing like this,” and it is specially those, or mainly those who believe in God, who pray and worship regularly, who consider themselves “better” than others, that are the ones who discriminate. If your God does not discriminate, why do you? It is your God, your Lord, who called out to his dear devotee Chokha, opened the temple doors and took him into his arms. It is the same human body, maybe different in size and colour — then why discriminate?

Now after Chokha Mela what is next for you?

(Laughs) Nothing is next for me right now. Something happens when there is that spontaneous urge in me that fires up or when someone approaches me for something. So for now it is just Chokha Mela and his love for Vithal for me.

Jhelumji is an artiste who comes on the dance floor with a full heart and indeed full preparation, so if you hear that she is in your city performing don’t miss seeing her burn the floor and rule you mind and soul with her artistic dance, impeccable abhinaya and commanding voice.

For those of you who have not read the story of Chokha Mela nor seen Jhelumji’s divine dance, here is a brief of the Bhakti story:

Chokha was a saint of Maharashtra in the 14th century who belonged to the Mahar caste, considered “untouchable” in India in that era. He was an ardent devotee of Lord Vithal or Pandurang. He comes to Pandharpur, where stands the Vithal temple on the banks of the river Chandrabhaga, looking for his Lord. However, being a Mahar, he is beaten up by the upper caste brahmins who suspect him of wanting to enter the temple. He pleads with them saying, “Johaar maay baap,” — I do not want to enter the Lord’s holy temple, let me just be here, near him, I am hungry, I am starved of the Lord’s love. Just let me be here, I will clean the temple premises. The brahmins relent. Chokha’s love for the Lord makes him sing. He sings, “The air is thick with the colour of abir and gulaal, I cannot see you, but I will sit on the steps and sing your praises.” He sings with such devotion that people gather round him. This upsets the brahmins. They beat him once again and throw him into the river. Sad, Chokha swims across and stays there, looking at the temple from afar. Tired, he sleeps. He then hears someone calling him. The voice comes from the temple. Chokha’s love for his dear Lord is so strong, that the Lord calls him. As if in a dream, Chokha walks across the river. To his surprise, the temple door is open! This has never ever happened. His dear Lord is standing before his eyes. Chokha absorbs the Lord’s beauty and sings. He falls at Vithal’s feet and then they embrace each other. Chokha is delirious with happiness.

Sandip Soparrkar holds a doctorate in world mythology folklore, is a World Book Record holder, a well known Ballroom dancer and a Bollywood choreographer who has been honoured with three National Excellence awards, one National Achievement Award and Dada Saheb Phalke award by the Government of India.

He can be contacted on sandipsoparrkar06@gmail.com