IAF trains pilots ahead of Rafale debut in Sept 2019

IAF is expected to send a batch of its pilots to France for training on the Rafale jets by the year end. 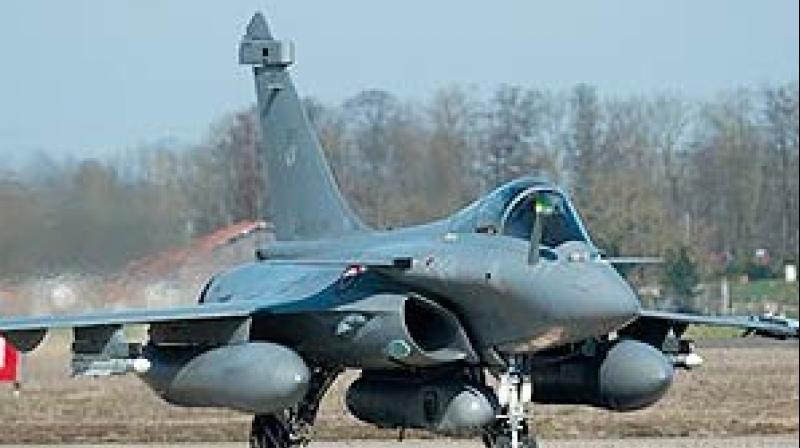 The agreement between Indian and French Governmental was finalised in September, 2016, for purchasing 36 Rafale fighter jets at an estimated cost of Rs 58,000 crore. (Photo: Representational | AP)

New Delhi: Amid the ongoing political controversy of the Rafale jet deal, the Indian Air Force is making the necessary arrangements for the induction of the fighter jet by training its pilots and putting in place the other necessary infrastructure. IAF is expected to send a batch of its pilots to France for training on the Rafale jets by the year end.

Some IAF teams have already been to France in a bid to manufacturers of Rafale put in place some of the enhancements which are specific to IAF’s requirements on the fighter aircraft.

The agreement between Indian and French Governmental was finalised in September, 2016, for purchasing 36 Rafale fighter jets at an estimated cost of Rs 58,000 crore. The first batch jets which are capable of carrying a number of lethal weapons and missiles are expected to be delivered beginning September next year.

Manufacturers of Rafale jets, the  Dassault Aviation, is believed to have already started test flight of Rafale jets to be handed over to India and the company has been told to strictly adhere to the timeline for delivery of the aircraft. These jets will come with various India-specific modifications, including Israeli helmet-mounted displays, radar warning receivers, low band jammers, 10-hour flight data recording, infra-red search and tracking systems among others.

While a team of IAF pilots have already trained on Rafale jets in France, they are expected to go back again by end of the year, sources added. The first unit of the fighter jets is expected to be deployed at the Ambala Air Force station, which has a strategic importance considering that the Indo-Pak border is around 220 km from the base. The second squadron of Rafale will be stationed at Hasimara in West Bengal.

The Centre has already cleared an amount of nearly Rs 400 crore for developing infrastructure like shelters, hangers and maintenance facilities for the Rafale aircrafts at these two Air Force stations.

Sources claimed that French agencies were in constant touch with their Indian counterparts regarding the progress in supplying of these jets. In July last year, Air Chief Marshal B S Dhanoa, during his visit to France, flew a Rafale jet at the Saint-Dizier airbase to gain a first-hand experience of the aircraft.

As per the agreement the delivery of the jets will start in 36 months and will be completed in 67 months from the date the contract was inked.