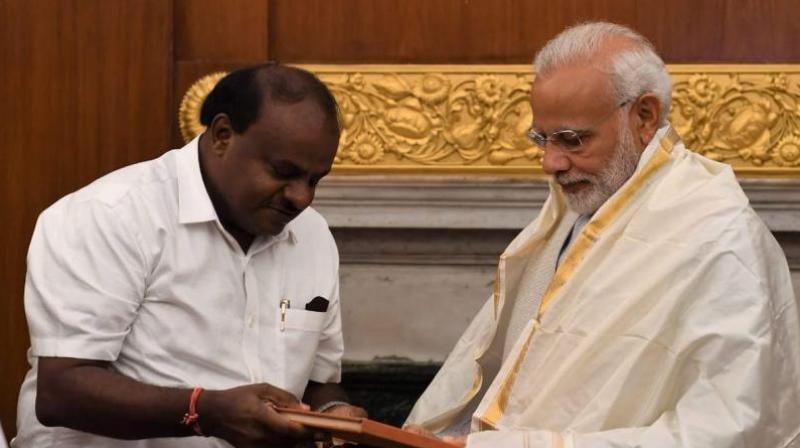 The delegation also apprised the Prime Minister of the prevailing drought-like situation in 17 of the total 30 districts in the state.

BJP's Karnataka unit leaders were also invited to the meeting but they chose to give it a miss. After the meeting, Kumaraswamy said, "We have told the Prime Minister that the floods in seven districts of the coastal and Malenadu region have not only affected crops but also infrastructure and human life. We have requested Rs 1,199 crore relief from the Centre."

Kumaraswamy said floods and landslides in the state have caused a loss of Rs 3,705.87 crore. He said his government has already released Rs 49 crore from the State Disaster Response Fund (SDRF) and an additional amount of Rs 200 crore from the state fund to the effected districts towards immediate relief and rehabilitation work.

The chief minister had recently submitted an interim proposal in this regard to Union Home Minister Rajnath Singh, who had assured of sending a central team to ascertain the damage caused.

With regard to the drought-like situation in the state, Revenue Minister Deshpande said 17 districts in the interior parts of northern Karnataka and a few districts in southern interior are facing severe drought.

About 89 taluks are facing a drought-like situation, he said. "A decision to declare these taluks as drought-hit will be taken tomorrow (Tuesday) in the state cabinet sub-committee meeting. Thereafter, full assessment will made and a memorandum seeking central relief will be submitted in due course," he said.

The crop loss alone is estimated at more than Rs 8,000 crore taking into account the preliminary assessment of the drought-affected area, he said.

Against the total kharif area of 74.69 lakh hectares, sowing has been done in 62.88 lakh hectares as of now. Sowing in the rest of the area has not taken place due to lack of adequate rains, he added.