In fact top official sources have confirmed that the work under the NMCG actually gathered steam only in March 2017. 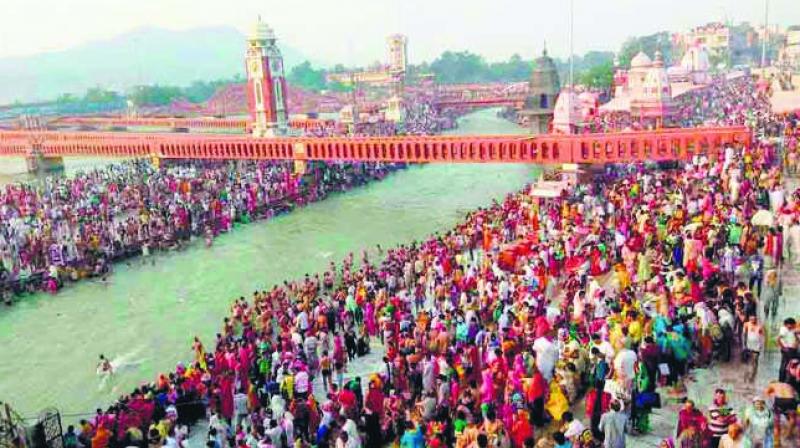 In fact the actual work on the project began only 18 months back, i.e. in March 2017, sources further informed.

New Delhi: With the NDA Government having entered its final year in office and its ambitious plan of cleaning river Ganga under its flagship “National Mission for Clean Ganga” (NMCG) nowhere near completion, the Narendra Modi-led dispensation has gone bullish by advancing its deadline by a year to March 2019 from the original March 2020.

However, considering the fact that only 33 per cent of sewerage treatment projects having seen completion in the past four years — which is a major component of the mission — the achievement of this deadline could well be a challenging task, sources aware of details, said.

Highly placed sources said that with the aim of expediting the high profile project, the Centre spent Rs 1,625 crore on it in 2017-18, which is much more than the total Rs 1,300 crore which had been spent during the first three years of the plan since it was launched in 2014-15. In fact the actual work on the project began only 18 months back, i.e. in March 2017, sources further informed.

The plan for cleaning Ganga and its tributaries had been announced by the NDA Government soon after it had come to power in May 2014, however sources close to developments told this newspaper that despite the Prime Minister personally taking keen interest in it, a lot of time had been wasted in finalising modalities of its execution.

In fact top official sources have confirmed that the work under the NMCG actually gathered steam only in March 2017.

A major component of the Clean Ganga plan are completion of sewerage instrurcture projects (under which sewer treatment would be undertaken to clean up the Ganga river bed and also of its tributaries). However out of the 104 sewerage infrastructure projects sanctioned, only 26 have been completed, while the remaining 78 are to be completed between December 2018 and December 2021. Under such a scenario, the Government’s aim of meeting the March 2019 deadline could turn out be an uphill task.

Apart from this, out of the total 64 projects for beautification of ‘ghats’ originally sanctioned under NMCG, till date (March 2018), only 24 such projects have been completed. Therefore it would be a race against time for the Centre to get these works completed by March 2019.